Rainfall from January to April 2020 has enabled partial recovery of some wetlands and waterbird populations –  but only significant further rain and floods would help bring about a substantial recovery in Murray−Darling Basin water bodies after record-breaking drought during 2017-2019, UNSW’s Aerial Survey of Wetland Birds in Eastern Australia has shown.

The Centre’s annual survey – with results released today – covers a third of the continent and provides one of Australia’s most important long-term datasets on the health and biodiversity of the country’s river and wetland areas.

“There has been limited recovery in water storage levels in the Murray-Darling Basin with the rain since January 2020, which is good news after water storages in the northern Basin had reached the record low of 5.4 per cent of combined capacity in mid-January, 7.5 per cent lower than at any point during the Millennium Drought,” says Centre for Ecosystem Director Professor Richard Kingsford.

However, the scientists found the four major indices for waterbirds – total abundance, breeding index, number of species breeding and wetland area index – have continued to show significant declines over time.

“The results are alarming. If we leave aside 1983 and 1984, the peak years, three of the four major indices still show a significant downward trend – and long-term trends are more informative for predicting population status than year-to-year fluctuations,” Prof. Kingsford says.

All species abundances were well below long-term averages, in some cases by an order of magnitude – five out of eight species continue to show significant long-term declines.

“We also observed long-term changes in decadal averages of these key indices – in fact, wetland area index (104,014 ha) was the fifth lowest since surveys began, well below the long-term average.”

The scientists found waterbirds were most abundant in the Paroo overflow Lakes (40,000), the Macquarie Marshes (11,000), Proserpine Dam (17,000) and Lake Moondarra in the north. 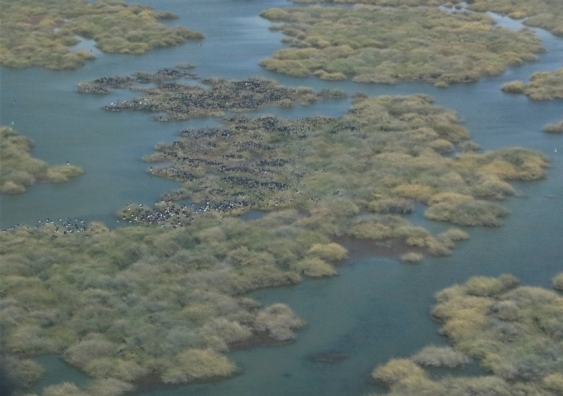 A large flooded wetland with lignum bushes. A small colony of a few thousand straw-necked ibis had established in the middle of the wetland. Photo: Richard Kingsford.

The numbers of waterbird species the team saw breeding is also continuing to decline over time, with fewer than last year.

“We only recorded three species breeding, the sixth lowest on record,” Prof. Kingsford says. “Total breeding index, i.e. nests and broods, was 364 (all species combined), a considerable decrease from the previous year (1987) and well below the long-term average.”

Given the concerning trends, the scientists say it is important to look at long-term causes, including the effects of the current drought and the ongoing decline in the health of the rivers as a result of reduced flooding with water resource development. Scientists also remain concerned about the long-term impacts of a drying climate on the rivers and wetlands.

“These long-term data are critical to identifying trends in the health of rivers and wetlands and it is important that we continue to track these changes so that we can identify the problems and solutions,” says Prof. Kingsford.

“The implementation of the Murray-Darling Basin Plan is critical, most importantly ensuring that the floods continue to bring health to our rivers and their waterbirds.”

The University of Sydney partners with 360info & Monash University to support…

Monash continues to welcome our students from China