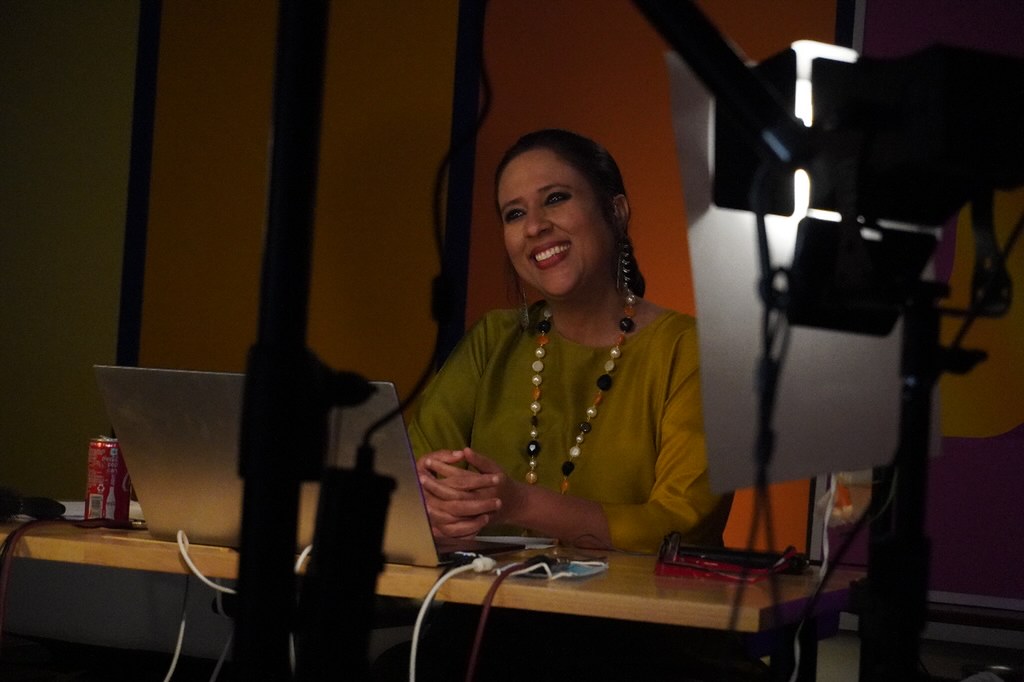 We The Women encouraged important dialogue and discourse!

New Delhi: We The Women by Barkha Dutt, award winning journalist, Founder-Editor of Mojo Story, completed its fourth edition on 18th December, 2020. The Global Townhall brought headline grabbing conversations from across the world on one virtual stage.

This pandemic has made each one of us go through an extra-ordinary time and has enabled us to try, experiment, accept challenges and start all over again.

We The Women is a community that connects exemplary women and men from a range of professions, spanning from cinema, politics and sports to literature and law. Covering speakers from all walks of life, these are people who walk the talk, led by example, and continue to make a difference to the world with the amazing work that they are doing. The townhall saw some intimate conversations and experiences of speakers like Saxophone Subbalakshmi, Time Magazine’s ‘Kid of the Year’ – Gitanjali Rao, Dr. Soumya Swaminathan (Chief Scientist, WHO), Urmila Matondkar, Khushbu Sundar, Nusrat Jahan, Actress Kareena Kapoor Khan, Actor Sonu Sood, Ananya and Neerja Birla, Indian billionaire entrepreneur Kiran Mazumdar-Shaw, amongst others.

Time Magazine’s Kid of the Year, Gitanjali Rao spoke of her intimate connection with India in a conversation from Colorado. ((https://www.youtube.com/watch?v=DBHJTr-Avkw )). Rao, who said she comes to India every year, called out the image of “white & male scientists” she sees on American mass media and spoke of ‘Kindly’ an app she has developed to fight cyber-bullying.
An intimate portrait of Dr. Soumya Swaminathan, Chief Scientist of the World Health Organization revealed how growing up as the daughter of famed agricultural scientist M.S Swaminathan shaped her. Dr. Swaminathan, took questions on whether the WHO had fallen short in its response to the Pandemic. Sounding a warning against the “fatigue and complacency that has set in” she said, despite the vaccinations, “the next 6 months could be worse than what the world has seen so far” (( https://www.youtube.com/watch?v=56Kl78vp90c)).

A fascinating conversation brought together three actors who have since transited to a new profession in politics. Khushbu Sundar (BJP), Urmila Matondkar, (Shiv Sena) and Nusrat Jahan (TMC) spoke on being women who have moved from ‘Roles to Polls.’ All 3 agreed that “the world of politics is more sexist than the world of films.” All three spoke of being bullied online with violent threats and abuse. Matondkar said, her husband Mohsin, had repeatedly been called a terrorist, “just because he is a Kashmiri Muslim.” ((https://www.youtube.com/watch?v=BsjFmbBjIG4)). Nusrat Jahan, said she had been “targeted, just for marrying a Hindu,” ((https://www.youtube.com/watch?v=–kawXk4IbA)). Khushbu Sundar, spoke movingly and for the first time ever about her father, being “sexually and physically abusive to me and my mother. When he died, I felt nothing. He was my father only in name.” ((https://www.youtube.com/watch?v=r-xmWSMJAWg&t=1s)).

Kareena Kapoor Khan opened up like never before on how “scarred’ she felt by the trolling and hounding over her son Taimur. “It was ghastly and disgusting.”
(https://www.youtube.com/watch?v=mtYQLcB8744)).

University of Michigan: $3.4M to turn up the heat at…

In a 60-minute conversation, she described herself as a “rebel’ who was sent to boarding school after she broke open a lock to meet a boy she liked. ((https://www.youtube.com/watch?v=8NFApT5OtDQ)). She debunked the ‘Size Zero’ stereotype associated with her by saying “that was only for a movie. I am a growing Punjabi.” ((https://www.youtube.com/watch?v=aLt6tb6PNT0)) and called out trolls and sections of the media for “treating the film industry as a soft target. Legacies have been built here.”

One of India’s most prominent business families broke the silence around the taboo subject of Mental Health at the Global Townhall. Neerja Birla, wife of Kumar Mangalam Birla, was on the We The Women Stage with her daughter Ananya who has battled Clinical Depression for many years. Mother and Daughter spoke of the stigma associated with Mental Illness, the ignorance and often the meanness, sometimes from “members of our own extended family.” In an emotional session, Ananya Birla spoke of the pressure on her mother as the caregiver, Neerja, who said, “I should have sought help. I should have also gone into therapy.” ((https://www.youtube.com/watch?v=Vtrl7FxlBP0))

Kiran Shaw, just named one of the 100 Most Powerful Women in the World spoke of how even after being India’s first woman Brewmaster she simply could not get a job. “Gender Bias eventually led to the creation of Biocon,” she quipped. ((https://www.youtube.com/watch?v=jCLU1j0Qx8Y)). Shaw spoke of how wealth has changed her – “It has only made me more of a philanthropist”, her mother. who works at the age of 90 and whether trolling hurts her, in a fascinating glimpse of the person behind the persona. ((https://www.youtube.com/watch?v=g2iAyD_IRls))

Divya Gokulnath, the Co-Founder of the educational Learning App, BYJU’s, and today worth nearly 4000 crores spoke of whether her own children will learn from the app, what she bought with her first salary and the controversy around the White Hat coding program. ((https://www.youtube.com/watch?v=y9J-tv5Wp7s)).

We The Women has always believed that men are critical to the conversation about patriarchy and equality- and this year was no different. In a session called, ‘Men We Love’, Barkha Dutt spoke to Sonu Sood and Vikas Khanna about their altruistic, humanitarian work during the pandemic and lockdown. Sonu Sood spoke of how he found the images of the farmers protests unforgettable ((https://www.youtube.com/watch?v=CLYrlluQ554)) and Vikas Khanna choked up with tears, saying, “my life is based on food, the food they grow.” In a heart-warming reunion, Sonu Sood and Vikas Khanna ( who joined from New York) were reunited with their sister and mother in Punjab. The men who have acquired cult status spoke of what their next steps might be and whether that could mean politics. ((https://www.youtube.com/watch?v=4lpocQ4WXEk)).

Other high-profile speakers who were at the Global Townhall included Roopa Kudva, Managing Director of Omidyar, Upasana Taku of MobiKwik, Rashmi Daga of Fresh Menu, Vaishali Sinha of CII, Asha Devi (Nirbhaya’s mother) and stand-up comic, Sumukhi Suresh. The all-women team who developed India’s first COVID testing kit were feted in a session called ‘Front-9 Workers’. We The Women also unveiled the Covid Courage Awards for 2020 which were given to Kiran Shaw, Dr Soumya Swaminathan, Dr. Aparna Hegde for her work in the slums of Mumbai, Nurse Yogita Bagad who first battled Kasab during the terror attacks of 2008 and then served at the frontline of the COVID war, Dr. Jayanthi & Aditi Shastri, the mother-daughter duo who have been researching the pandemic and Shruti Dandekar for her mission to spread the availability of masks.

The final speaker was Padma Lakshmi, author, food expert and TV host who joined from New York. Padma, who has been a vocal supporter of Kamala Harris and campaigned for her, opened up on why she wrote about being raped at the age of 16, more than three decades later ((https://www.youtube.com/watch?v=A9x1cPfCkvc)), her deep emotional connections to India, her former marriage to Salman Rushdie and why this was the year when the personal became the political.

University of Michigan: Researchers from U-M, MSU, OU team up to develop wearable…

University of Michigan: $3.4M to turn up the heat at solar-thermal plants

University of Michigan: Changing weather patterns mix up the size, duration of annual…

University of Michigan: Researchers from U-M, MSU, OU team up to develop wearable…

iednewsdesk Dec 4, 2021
A walk in the park could soon include getting real-time measurements of pollutants in the air and updated walking…

University of Michigan: California researchers, with assist from U-M,…

University of Michigan: $3.4M to turn up the heat at solar-thermal…

University of Michigan: Changing weather patterns mix up the size,…

University of Leeds: Efforts to restore Indonesian peatlands could…

University of Leeds: Volcanic fertilisation of the oceans drove severe…