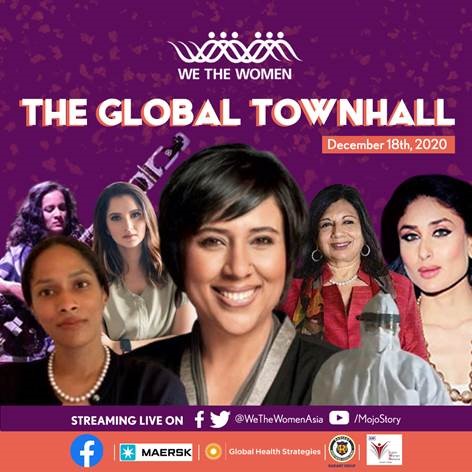 We The Women promises to be bigger and better this year; An engaging platform curated by Barkha Dutt for Facebook & UN Women

Mumbai: It is that time of the year when the annual flagship event ‘We The Women’ curated by award-winning journalist, Barkha Dutt is back. And this time it gets bigger and better. The festival which has established itself as the premiere gender forum of its kind, has been known for its high-profile speakers and intimate conversations. The event will feature speakers from all walks of life who will be seen coming together under one roof. Keeping the current circumstances in mind, the event will be virtual this year and will be live streamed on Facebook and YouTube on 18th December from 10.30 AM until 9:00 PM.

Unlike other conferences, We The Women is a community that connects women and men from a range of professions, spanning from cinema, politics and sports to literature and law. Covering speakers from all walks of life, these are people who walk the talk, lead by example, and continue to make a difference to the world with the amazing work that they are doing.

This year’s line-up includes powerful and impactful women like Kiran Mazumdar-Shaw who has been featured in the list of 100 Most Powerful Women in the World, followed by Soumya Swaminathan, Chief Scientist of the WHO.

Representing the Indian Film industry will be Kareena Kapoor Khan who has been empowering women through her talk-show ‘What Women Want’ along with Sonu Sood and Vikas Khanna, who have given back to the society this year and worked for the underprivileged and people affected by the pandemic in more ways than one.

ASSOCHAM | Omicron| Yoga can help you tide through the…

Furthermore, the panel will also feature the likes of Gitanjali Rao, the Indian-origin American teenager who was recently named ‘TIME Top young innovator’ in 2020 for her innovations and “innovation workshops” she conducts across the globe and was also featured on the cover of TIME magazine and named “Kid of the Year”.

Roopa Kudva, MD of Omidyar Network India & Upasna Taku, Founder MobiKwik will be seen speaking on Female Entrepreneurship while Khushbu Sundar, Urmila Matondkar & Nusrat Jahan will be seen discussing the topic on whether ‘Is Politics Still a Boy’s Club?’. Last but not the least, Ananya and Neerja Birla will be shedding light on ‘Women and Mental Health’.

We The Women will be held virtually this year.

ASSOCHAM | Omicron| Yoga can help you tide through the Pandemic, say Health &…

Heriot-Watt University: The National Robotarium partners with Leuchie House to…

iednewsdesk Jan 19, 2022
The National Robotarium, delivered by Heriot-Watt University and the University of Edinburgh, has partnered with…