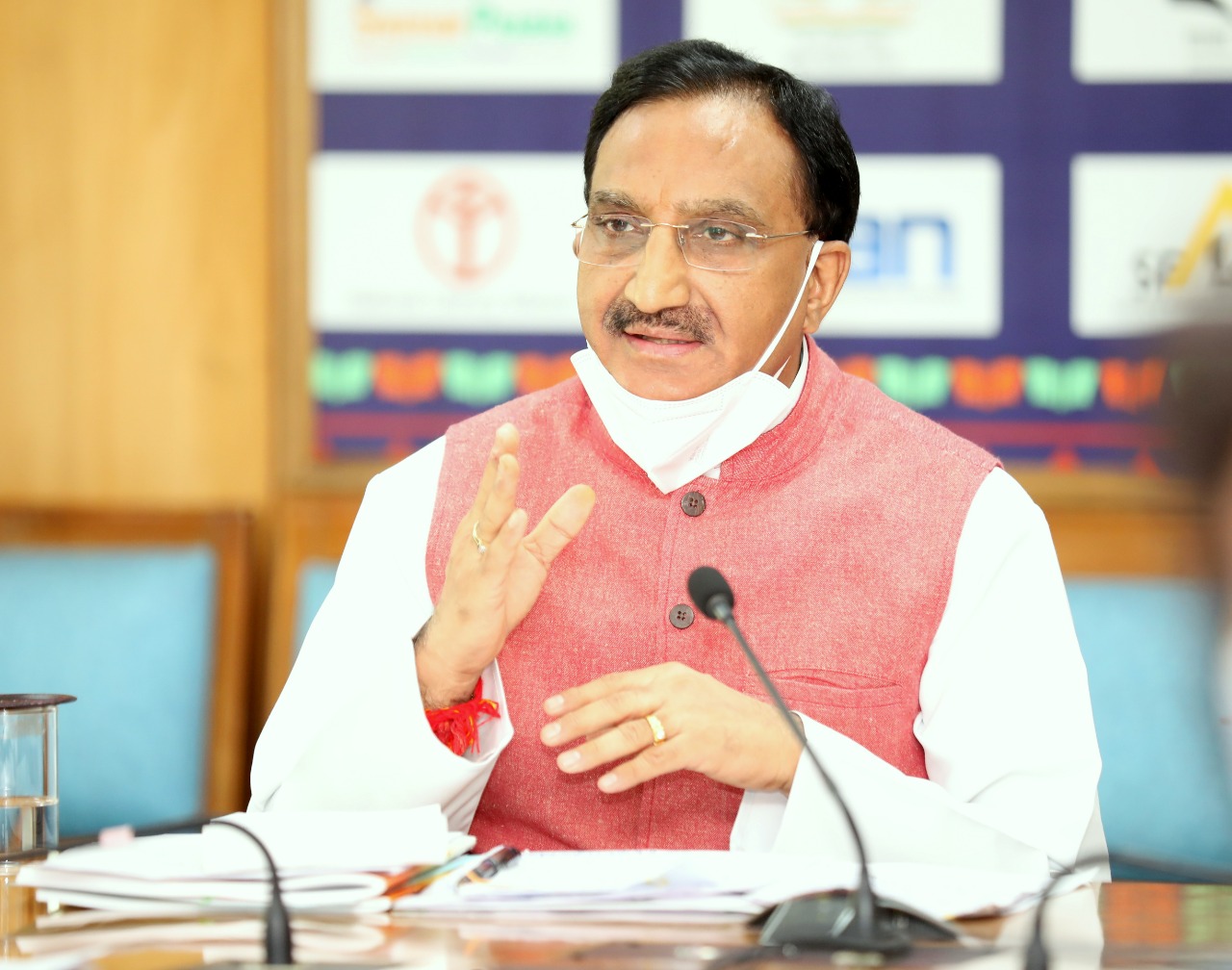 The Minister congratulated AIMA students for receiving their various management degrees, diplomas and certificates. At the convocation, 17 students were presented PhDs in Business Administration, a course run by AIMA in partnership with Aligarh Muslim University. AIMA’s flagship Post-Graduate Diploma in Management was presented to 603 students. The Post-Graduate Diploma in IT Management was given to 13 students and 925 students were awarded certificates and diplomas for completing various short and specialized management courses.

The Minister said that the New Education Policy (NEP) was the foundation stone of a new golden India. “The NEP is India centric and technology centric,” he said. He pointed out that India would be the first country in the world to introduce Artificial Intelligence as a subject from the 6th standard in school.

Dr Nishank declared that the new curriculum of management and engineering institutes would be developed in partnership with the industry. He also stated that now onwards 50% of the students of IIMs and IITs would work with the industry during their studies.

“Now, we will stop both talent and patent from leaving the country,” the Minister proclaimed. He pointed out that 7.5-8 lakh Indian students go overseas looking for their future and, in the process, Rs 1.5 lakh crore flows out of the country. “India is contributing to the excellence of other countries,” he remarked. He added that the proof of our education’s excellence is that the CEOs of Google and Microsoft studied in India.

The Minister said that India would lead the online education revolution and efforts would be made to offer online courses from the world’s top 100 universities. He appreciated AIMA’s initiative in promoting online education and testing, and asked the organization to promote the objectives of the NEP.

AICTE Chairman, Dr Anil Sahasrabudhe delivered the keynote address of the convocation. He appreciated AIMA for holding the country’s first entirely online convocation. He pointed out that covid had allowed higher education and regulation to go online though AICTE had faced stiff resistance for two years in digitalizing the approval process.

Dr Sahasrabudhe said that giving online degrees will enable rapid growth of gross enrolment ratio in India’s higher education. It would be difficult and expensive to set up new physical universities in big cities and towns, he pointed out. He applauded AIMA for pioneering the open and distance learning model in management in the country.

“Now, curriculum revision has to be annual and new courses have to be added all the time,” AICTE Chairman said. He pointed out that AI, machine learning, robotics, 3D printing, AR, VR, cloud and data analytics were among the new subjects that needed to be added to higher education, and for that the faculty had to be trained first. He informed that AICTE had been able to ramp up faculty training substantially by holding workshops online during covid. Last year, AICTE had managed to train 9,600 faculty in the physical mode whereas in the past three months, it had trained more than 18,000 faculty.

AICTE Chairman said that though questions were being raised about the effectiveness of online education, the experience of large-scale shift to online classes during covid had shown that the quality of education was not affected if the teacher was good.

Dr Sahasrabudhe appealed to AIMA to promote India-centric case studies and promote Indian cases all over the world. AIMA Director General, Ms Rekha Sethi informed that AIMA had already set up an India Case Research Centre for that purpose.

AIMA President Mr Sanjay Kirloskar hailed the Minister of Education for introducing a visionary education policy. “I congratulate the government for providing a state-of-the-art framework for modernizing education in India,” he said. He appreciated the NEP for promoting India’s integration into the global education system and making India an education hub. He applauded the NEP for attempting to save both the precious foreign exchange and Indian talent. He pointed out that AIMA had signed up with University of California Santa Cruz to offer a joint course in management and innovation.

Mr Kirloskar picked the research focus of the New Education Policy for special mention. He said that it was odd that Indian B-Schools and businesses had not produced a world-class management guru though Indians who teach abroad became leading gurus. He appreciated the proposal to set up a National Research Foundation.

Mr Harsh Pati Singhania, Senior Vice President, AIMA applauded the Education Minister for revolutionizing higher education in the country with NEP and making it more valuable, accessible and affordable. He appreciated the NEP for establishing clear and consistent norms for open distance learning. “The policy has opened up exciting possibilities for online education in the country. AIMA is committed to helping build a digital-age, world-class ecosystem for open and distance learning in India,” he said. He thanked AICTE Chairman for helping modernize and digitalize higher education.

AIMA Director General Ms Rekha Sethi said, “This is the most satisfying day of the year for AIMA. It gives us a great sense of achievement to contribute another batch of over 1,500 qualified managers to India’s economy.” She expressed confidence in the capacity of AIMA graduates to do well in a tough economy. “The doom and gloom caused by covid is temporary and while the road ahead may be tough and hard, I have no doubt this class of 2020 will find its way!” she said.

Dr Bhimaraya Metri, Chairman, Board of Studies, AIMA and Board Member, IIM Trichy, presented a report of education and research activities of AIMA during the year.

Closing the convocation, Mr Singhania appreciated the participation of the Education Minister and the AICTE Chairman and thanked them for sharing their vision for Indian education’s future.

Onco.com partners with popular actor Sanjana Sanghi to drive awareness on the availability of affordable and accessible cancer care