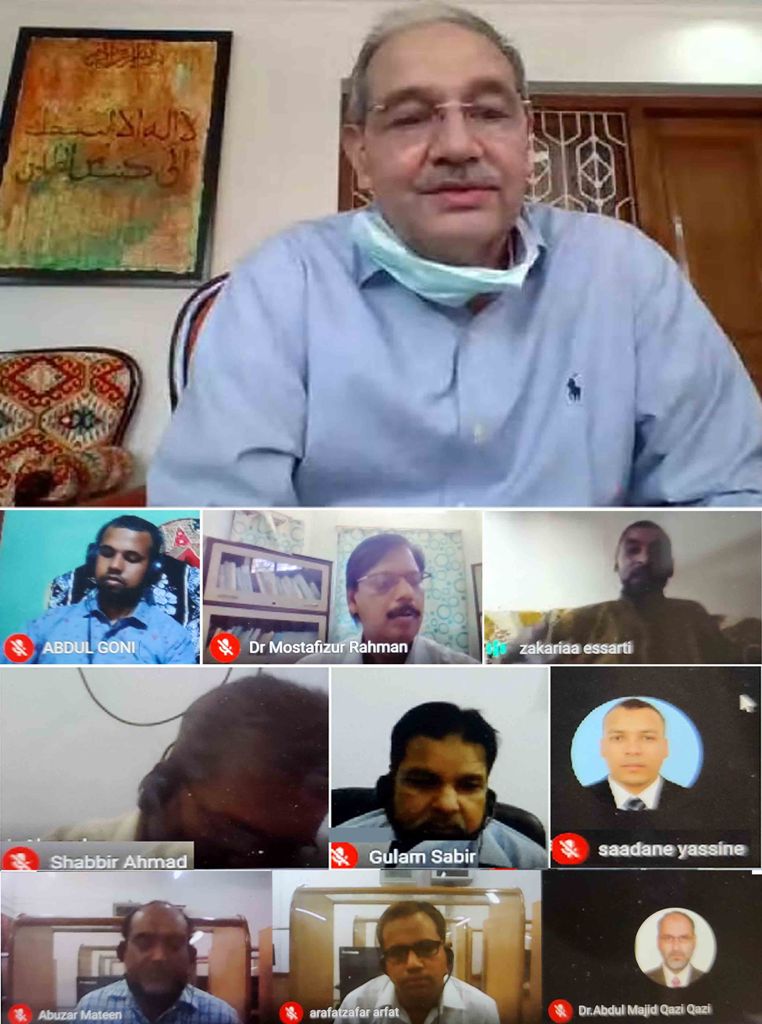 Webinar on ‘Gandhian Philosophy from the Prism of Arab Writers’

Aligarh: “Gandhian principles were cornerstone of 20th century, a huge body of literature has been produced on the life and contribution of Mahatma Gandhi in different languages of the world and the Arabic language is no exception,” said Aligarh Muslim University Vice Chancellor, Prof Tariq Mansoor.

Speaking in the webinar on ‘Gandhian Philosophy from the Prism of Arab Writers’ organised by the Department of Arabic, Aligarh Muslim University (AMU) to commemorate the 151st birth anniversary of Mahatma Gandhi, the Vice Chancellor, Prof Mansoor explained how the Indian freedom movement under the leadership of Mahatma Gandhi had a great impact on the Arab intelligentsia and men of letters.

The Vice Chancellor added that in the course of time Gandhiji became so popular in the Arab world that all his minor and major activities were sympathetically reported in the press of Arab countries. Several renowned Arab journalists, writers and poets wrote articles, books and poetical compositions on different aspects of the life of Gandhi, making an overall assessment of his life and personality.

He also gave an overview of Mahatma Gandhi’s legacy.

Professor Masood Anwar Alavi enlightened the participants with the history of Gandhiji’s association with the AMU.

Discussing the ‘high thinking, simple living’ philosophy of Mahatma Gandhi, he highlighted the special place, Mahatma Gandhi occupies in the heart of every patriotic Indian by virtue of being the father of the nation, and the undisputed leader of the Indian freedom struggle.

Prof Faizan Ahmad, Chairman, Department of Arabic said that the objective of the webinar is to educate the young, especially advanced students and researchers of Arabic literature about the seminal works of Arab writers and scholars on Gandhi’s philosophy and teachings. He discussed the works of writers and thinkers such as Al Aqqad, Salaama Musa and Ismail Mudhhir among others.

Dr Yassine Saadane, Senior Researcher, University of Mohammad V, Casablanca, Morocco, delivered a lecture on, ‘Explorations on the Philosophy of Nonviolence as propounded by the Spiritual Philosopher Mahatma Gandhi’.

Dr Arafat Zafar extended the vote of thanks.

The Department of Tahaffuzi Wa Samaji Tib (Preventive and Social Medicine), Faculty of Unani Medicine observed the Gandhi Jayanti with a week-long Film Festival screening films on Mahatma Gandhi, said Prof Rubi Anjum, Chairperson of the Department. She also delivered an online lecture on ‘Mahatma Gandhi: The Father of Nation and his Life’.

Prof Subuhi Khan (Provost of the Hall) delivered an online lecture on the universal and timeless philosophy of Mahatma Gandhi. Ms Alisha Ibkar extended the vote of thanks.

Deliberations were made on Gandhian thoughts and principles such as nonviolence, Sarvodaya and Satyagraha in a webinar organised by the STS School to observe the occasion. Mr Faisal Nafis (Principal, STS School) stressed the need of understanding the relevance of Gandhi and his ideas in the present scenario.

AMU faculty delivers a lecture on language and NEP 2020