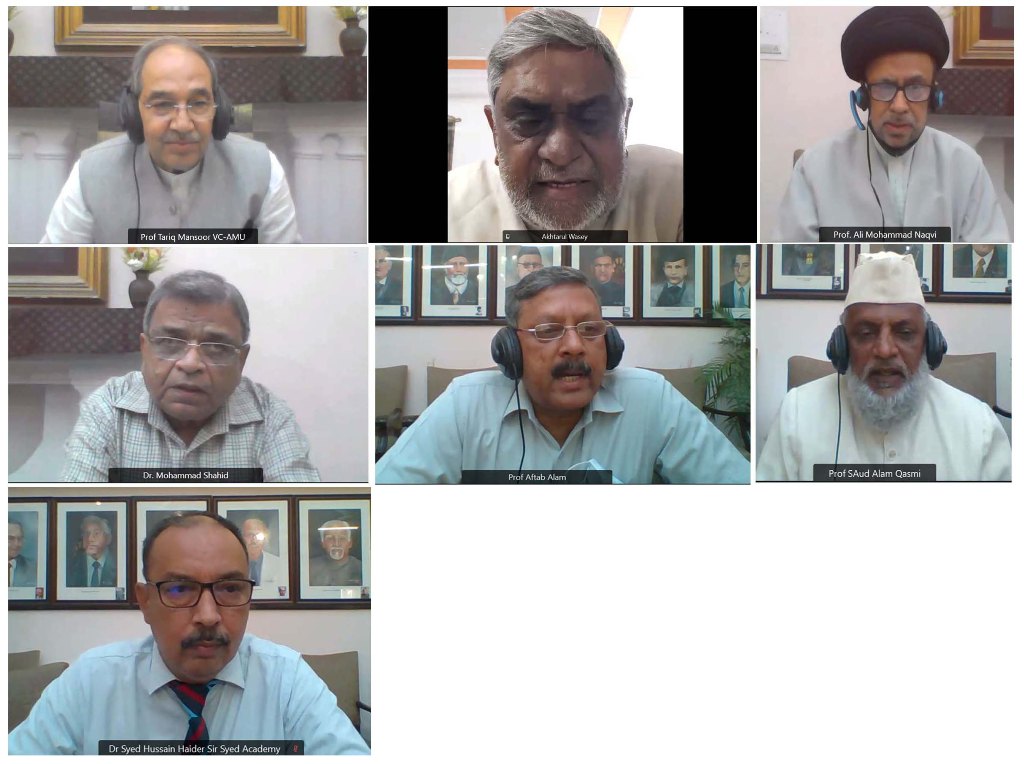 In his inaugural address the Vice Chancellor Prof Tariq Mansoor said that the Sir Syed Academy has been very active and are working on digitalization of the records. He appreciated the efforts of the Director of Sir Syed Academy Prof Ali Muhammad Naqvi and Deputy Director, Dr Mohammad Shahid for organizing the webinar on the important topic of the time as well as for initiating the centenary publication series of books and monographs about the companions of Sir Syed Ahmad Khan and the significant personalities associated with the Aligarh Movement.

Congratulating the authors of monographs for their valuable contributions to the Aligarh Movement the Vice Chancellor said, “AMU is playing a key role in propagating Sir Syed’s liberal outlook and interfaith dialogue, he was foresighted reformist who advocated Muslims to adopt scientific temper and come out from medieval thinking”.

The Chief Guest Dr Syed Shahid Mehdi (IAS) said that Sir Syed Ahmad Khan and his fellows did a wonderful job to change Indian society through the Aligarh Movement. This Movement made indelible marks on literature and lives of the people in the sub-continent especially Muslims.

It is need of the hour to revisit Sir Syed Ahmad Khan who propagated religious tolerance, freedom of expression and other liberal values, he added.

Prof Ali Muhammad Naqvi introduced Maqalat e Sir Syed and its significance. Further, he explained how Sir Syed Academy is continuously working in bringing the old and unique documents into prominence with relevant and necessary changes and modifications.

Prof Aftab Alam, Chairman, Department of Strategic and Security Studies, AMU introduced the monograph Sahebzada Aftab Ahmad Khan and said that the former Vice Chancellor of AMU was the most outstanding figures associated with the University and played a key role in the establishment of AMU, by drafting of its constitution and acts . Prof Alam said that he was instrumental in establishing Duty Society and Old Boys Association and played active role as Secretary and President of Muslim Educational Conference.

Dr Muhammad Shahid, Deputy Director of Sir Syed Academy, extended the vote of thanks to the panelists and the audience and Dr Syed Hussain Haider conducted the program.

ANU: Clock is ticking to save East Antarctica from climate change