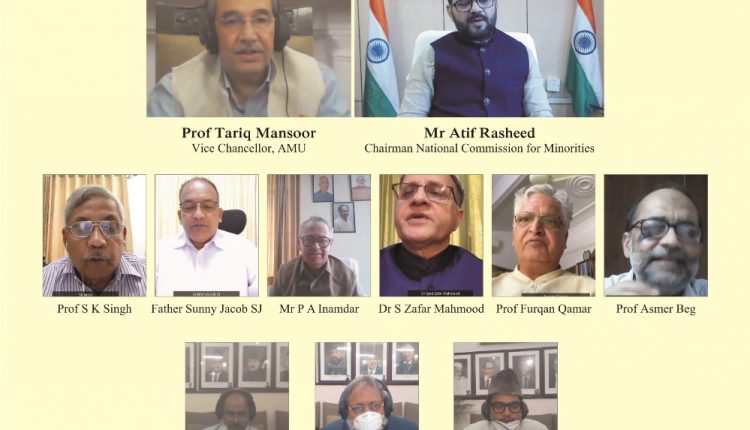 “The NEP-2020 was the need of the hour to transform the future of all the children and youth in the country. The education policy is in the line with sustainable development, imparting equal access to all and ensuring the success of the self-reliance campaign of the nation”, said Mr Atif Rasheed (Chairman, National Commission for Minorities).

He was speaking as the Chief Guest of the webinar.

Mr Rasheed added that since the NEP-2020 belongs to everyone with equal access, and equity, it will take the country on the path of becoming a vibrant knowledge hub of the world.

He pointed out that the new policy cohesively abides by the constitutional provisions and will generate capacity among socio-economically deprived communities including the religious and linguistic minorities to participate in and acquire benefits of education.

“A very important goal of the NEP-2020 is to increase the representation of minorities in educational institutions both at the school levels and higher education,” said Mr Rasheed.

He elaborated that various successful schemes will be systematically strengthened across the country and NEP is designed to encourage minority institutions and colleges.

“However, policies not always satisfy all sections of society. The doors are always open for discussions and improvements”, further said Mr Rasheed.

Presiding over the programme, AMU Vice Chancellor, Prof Tariq Mansoor said, “By and large NEP has been accepted all over the country after considerations of the widespread suggestions”.

“It is rare in democratic country to have a nationwide consensus. The National Education Policy has been introduced at the right time, to complement the process and vision of creating quality institutions, a culture of innovation, and a highly-skilled workforce”, added the Vice Chancellor.

Prof Mansoor pointed out that minorities have lagged behind in education because of a lack of good schools, poverty, social factors, customs, languages and geographical reasons. NEP is designed to focus on increasing the minority representation in school and higher education.

“The policy lays emphasis on socioeconomically disadvantaged groups, which includes all religious and linguistic minorities and it will not over-ride the constitutional provisions,” said the Vice Chancellor.

He further said that teaching and learning in the mother-tongue needs to be promoted, but the use of English language in education should not be discouraged.

Prof Mansoor also spoke on the importance of community participation in drafting policies, promotion of Urdu language, equal rights for religious and linguistic minorities and the majority community.

“A good policy should benefit the majority and minority communities equally,” he said.

“The policy has what India needs to dominate in the future decades of growth, and drive the education requirements of our young population. It will lay out a far-reaching vision to create learning environments that are multidisciplinary, that cater to a well-rounded education for all individuals with the immense potential to transform India’s human capital development”, he added.

Prof Singh pointed out that NEP has enough provision for minorities, but the exclusion of Urdu and Arabic in the policy should not be there. These languages should be included like the Classic Indian languages.

He added that the new policy talks of creating a central authority for education in the country, but is not clear on Article 30 of the Constitution that allows minorities to establish and manage educational institutions that not only helped in providing education but the promotion of their own language and culture.

Mr PA Inamdar (President, Maharashtra Cosmopolitan Education Society) emphasised that it is imperative to understand that every Indian in a way is a minority on ethnic, linguistic and religious basis.

He pointed out that there is time to think and ponder on how the new policy will be implemented within the parameter of the constitution and how it will change our teaching and learning.

Mr Zafar Mahmood (President, Zakat Foundation of India and Secy. Sachchar Committee) stressed the inclusion of Urdu and Kashmiri languages that find special mention in the policy and Arabic among the foreign languages mentioned there.

He added that in the light of the Articles 347, 350 and 350 A of the Constitution of India, the focus should shift to those languages which are spoken by a larger number of citizens.

“According to the Census 2011 report, there are 13.5 crore speakers of Urdu language in various Indian states”, he pointed out.

Prof Furqan Qamar (Ex Vice Chancellor, University of Rajasthan and Himachal Pradesh, Ex. Secretary AIU) said that Madarasa education finds no mention in the 56-page final draft of NEP 2020, but it can be assumed that it falls in the category of alternative schooling.

He further spoke on increasing the number of teachers and students from the minority communities in schools and higher education institutions.

Prof Asmer Beg (Department of Political Science, AMU) spoke about providing special scholarships to socio-economically disadvantaged groups, the establishment of special education zones and reluctance of elite families from the minority community in sending their children to Urdu medium schools.

Organising Chairman of the programme, Mr Naseem Ahmad Khan (Director, CEPECAMI) delivered the welcome address. He informed that over 500 participants from various institutions registered for the webinar.

Dr Bachchan Ali Khan, Co- Chairman of the programme extended the vote of thanks.

University of Johannesburg: UJ CACS celebrates 100th anniversary of the founding of the Communist Party of China