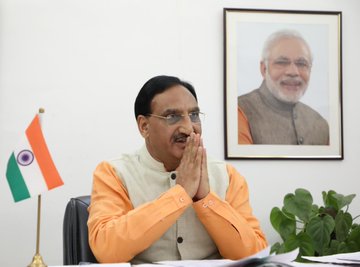 Webinar on “Promotion of Indian Languages” under Shikshak Parv Initiative

Language is an important component of education policy and the Central Institute of Indian Languages (CIIL) works for the promotion of all Indian languages. As part of Ministry’s programme, CIIL organized this webinar on focusing the promotion of Indian languages from the perspective of NEP 2020. The objective of this webinar was to highlight the language components of NEP 2020.

The themes of their talk are mentioned below:

1. The Scope for the Promotion of Indian Languages in NEP 2020

4. Development of Technology for Indian Languages

Prof. U. N. Singh emphasized the point that multilingualism has not been a burden to India and that each major language acts as a link to other languages. He also mentioned that there cannot be a standard strategy for the promotion of all as in some places home language will work while in some places mother tongue, local languages will work. He mentioned that the efforts and initiatives should be inclusive in nature and allow community participation. He emphasized the need to invest resources towards the preparation of textbooks for mother tongues and stated that linguists can play a very crucial role. He appreciated the efforts the Central Institute of Indian Languages and gave inputs on what the Institute and its schemes like NTM and NTS as well as the Regional Language Centres should do in order to achieve the stated goals of the New Education Policy.

Prof. Awadesh Kumar Mishra highlighted the fact that every language is a Mother Tongue even though every Mother Tongue may not have the status of a language. A language may have several varieties and only one variety enters the foray of language. He discussed the languages and mother tongues especially in the context of school education. He stated the need for the preparation of teachers who can offer education in mother tongues and gave emphasis on the fact that the language institutions of the Ministry of Education should work in coordination to achieve the stated goals of NEP 2020. Making use of the survey data Prof. Mishra portrayed the existing language scenario in schools and supported the continuation of three language formula in schools. He discussed that NEP provides the chance to include the excluded mother tongues and emphasized the need for higher coordination among the language institutions and higher education institutions, especially through the development of teaching-learning resources.

Prof. Anvita Abbi said that each language is unique and brings in the perception and cognition of the community and that many languages in India have survived over centuries. She further explained that according to the UN every fortnight a language dies and losing a language/mother tongue would cause loss of the knowledge and unique ways encapsulated in the concerned languages/mother tongues. She suggested that a core grammar of Indian languages can be prepared and a National commission of Indian Scripts can be established. She also highlighted that language; especially MT needs to be studied at an early stage of learning as they codify ecological/indigenous knowledge. Concerning Hindi, she mentioned that it is not imposed but suggestive in NEP. The acceptance level of Hindi is more. It gives mobility across the nation. Hindi, not as literary variety, but in some form could be taught. Concerning English, she mentioned that English is not a foreign language in India anymore. She also suggested that Interactive multilingual dictionaries could be prepared to complement the new pedagogical order emerging from the implementation of the NEP 2020.