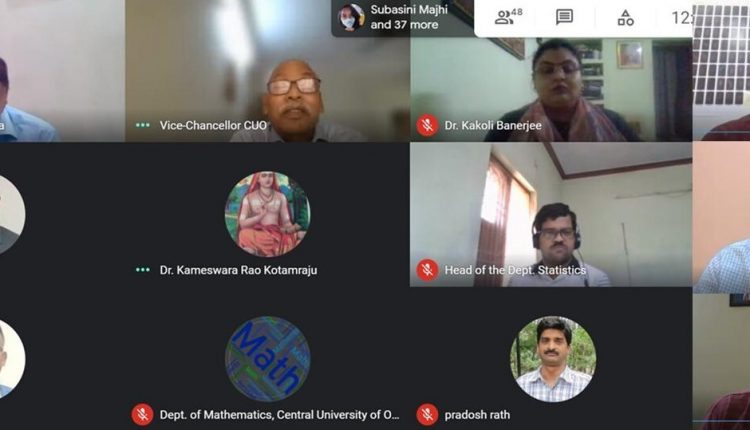 Koraput: On the occasion of Earth Day 2021, a webinar titled ‘Teaming to Restore Earth-An Initiative by CUO’ was held at the Central University of Odisha, organised by the School of Biodiversity and Conservation of Natural Resources. Prof. K. Kameswar Rao, Visiting Professor of CUO and Former Professor of Environmental Science, Andhra University delivered a lecture on the above subject. Inaugurating the webinar, Vice-Chancellor of CUO Prof. I. Ramabrahmam, expressed his concern for large scale environmental degradation and called upon scientists and social scientists not only to create awareness but also to embark upon projects/ actions leading to large scale scientific plantation drives to bring greenery all around. He stressed upon creating a scientific temper and awareness among the University community that can help restore our Earth. Prof. Sharat Kumar Palita, Dean, School of Biodiversity and Conservation of Natural Resources delivered the welcome address.

Prof. Rao in his illuminating address shared his views how the ever expanding human population has reduced resources and brought all sorts of problems starting from shrinking forest cover, pollution, global warming and climate change and increase in expenditure on health care. He stressed upon eco-friendly/earth friendly life styles to be adopted by CUO family by reducing ‘carbon foot prints’ at all levels. He asserted that towards restoring Earth, CUO-SBCNR initiative will be to make CUO the first Carbon Neutral University in coming years. He was optimistic that as an educational institution we have not only great role in creating awareness but also achieving the objective for cleaner and greener environment.

Prof. Palita highlighted different awareness activities on environment undertaken by the department of Biodiversity and Conservation of Natural Resources of the CUO. He said that COVID pandemic has thrown challenges on humanity as well as provided opportunity to set the earth on a clear, greener and more sustainable path.