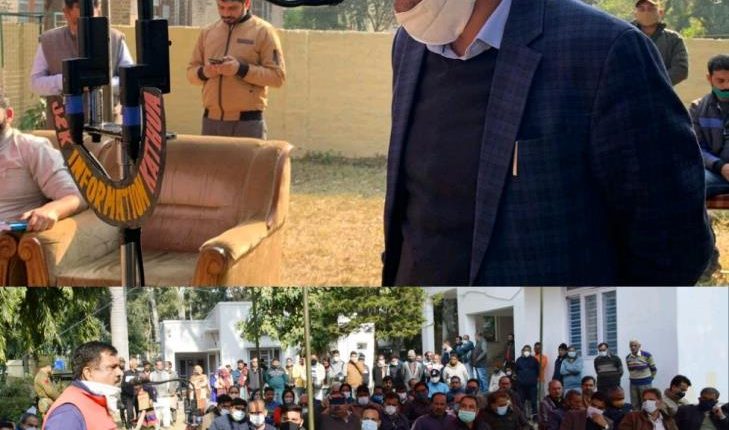 Several individual and PRI members projected several demands and problems being faced by them. They demanded up-gradation of Sub District Hospital with the provision of 100 bed capacity, meeting shortage of staff in the health and educational institutions, road connectivity to Panthal, Chhan Khatrian and Murli Chack, besides the replacement of electric poles in border Panchayats.

The BDC Chairman called for early disposal of the grievances projected by the PRIs and individuals. He demanded SRTC bus service in border areas, early completion of Children Park in Hiranagar, besides demanding more public-administration meetings in border villages to ascertain people’s aspirations and their problems. “Administration-PRIs should work in tandem to achieve all round development of the people especially living in border and far off areas” he added.

District Development Council member, Hiranagar Abhinandan Sharma, while addressing the public, said that Block Diwas is an opportunity for the people to apprise administration about the ground situation. He demanded road connectivity for Kunthal Panchayat, filling of vacant post of technician in Radiology Wing of SDH Hiranagar and early resolution of halted bifurcation process of ration card etc.

The DC asked the Officers to come up with the solution of the issues pertaining to their departments and give time lines/ line of action to redress the same. He assured people that their genuine demands will be redressed on priority.

He called upon the youth to avail opportunities offered under the umbrella of Mission Youth and other avenues of becoming self employed in agriculture, horticulture and allied sectors. He said the government has taken a series of steps to engage youth to capacitate them for making them not just self-reliant but also job providers for many others.

He also suggested PRIs to start the process of making plans for the next fiscal year so that the target of timely expenditure can be achieved.

While appreciating the farmers for starting cultivation in areas near IB, the DC said the administration will extend all help and expertise to cultivate the vacant land.

He also appealed to people to follow Covid Appropriate Behavior and vaccinate themselves at the nearest vaccination center to minimize the chances of Covid-19 spread.

Officers of Agriculture, Horticulture and Animal Husbandry briefed the people about their respective schemes and programmes launched with the aim to double the farmers income.