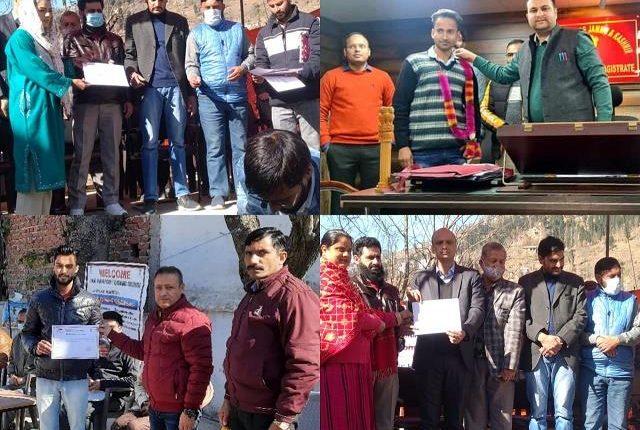 DODA : The District Administration Doda Wednesday held weekly Block Diwas proceedings across the designated places of the district to redress the public grievances and provide varied services to the people.

The entire program was held under the supervision of District Development Commissioner (DDC), Vikas Sharma.

As many as 153 grievances/applications were received during the day-long program and around 150 issues were redressed by the officers/officials of respective departments on the spot. Besides, 31 category certificates, 82 Domicile certificates, 21 different revenue papers were also provided to the people on the spot.

Meanwhile, during another program held under Yogyata se Rozgar Mahotsav, the newly appointed Class IV candidates were felicitated by the sub division administration. The officials congratulated them for securing their slots in a highly transparent recruitment process carried out by the UT Govt.

The candidates were garlanded and certificates were handed over to them by the elected representatives in the presence of impressive gathering.

The DDC members, BDC Chairpersons, SDMS besides elected representatives of Panchayats and other officers were also present during the program.