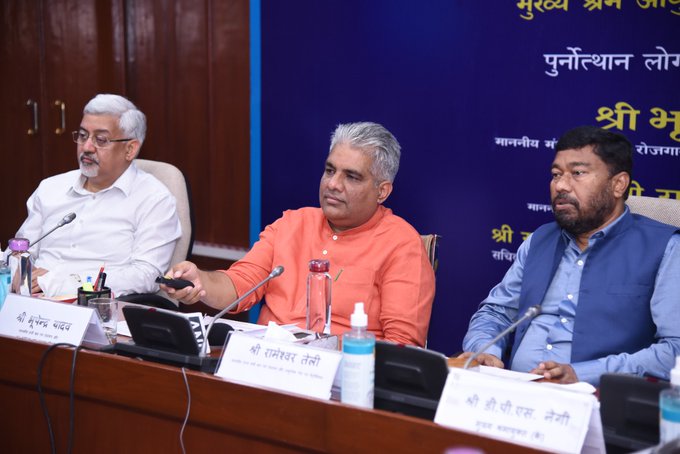 New Delhi: A revamped logo of Chief Labour Commissioner (Central), an Organisation was set up in 1945 which is also known as Central Industrial Relations Machinery (CIRM) was launched today by Union Minister for Labour and Employment, Shri Bhupender Yadav, in the presence of Shri Rameshwar Teli, Minister of State for Labour & Employment, Petroleum and Natural Gas and Shri Sunil Barthwal, Secretary(L&E).

Speaking on the occasion, Shri Yadav said that the government under the leadership of Prime Minister, Shri Narendra Modi is ensuring gender justice and ease of living as well as ease of doing business.

The Union Minister said that the Logo of an organisation is symbol and reflects its vision and emphasized thatthe New Labour Codes will increase the responsibility of the CLC organisation for implementation of the provisions of safety, health and welfare for mainly unorganized workersalong with organized workers and asked that not only the unorganized workers safety should be ensured, their life and working environment should also be safe.

“The new codes provide additional responsibility of the officials as facilitator to get compliance of the Law by educating the employers and bring the awareness among the workers about the welfare, safety and health provision provided in the new Codes.”, said Shri Yadav Now IT enabled system will help the employers for compliance of the law electronically system.

Shri Sunil Barthwal, Secretary (L&E) stated that the CLC organisation is performing important functions in maintaining harmonious industrial relations and implementation of Labour Laws and ensuring the compliance of the law at grass root level, the new Labour Codes will increase the responsibility of the CLC organisation which will balance protection of the workers as well as ease of doing business. The Secretary highlighted that now IT enabled system will help the employers for compliance of the law electronically system.

Shri D.P.S. Negi, Chief Labour Commissioner (Central) stated that the officers are working sincerely and dedicatedly and organizing the awareness camps for registration of unorganized workers on e-Shram Portal, in addition to their regular duties.

Maintaining harmonious industrial relations, Implementation and enforcement of labour laws, redressal of grievances of worker, welfare of workers, verification of membership of Central Trade Unions in the country.

The Logo is the identity of an organisation, earlier there was no logo of the CLC(C) organisation, a logo was adopted by the O/o CLC(C) in the year 2016. Now Changes in the logo have been done to reflect clear mandate of the organisation and other improvements have also been made.