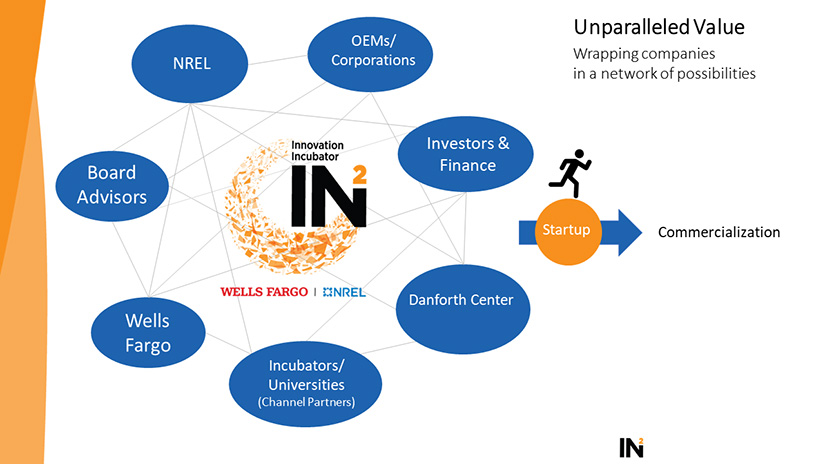 Wells Fargo Invests $20M To Extend Highly Successful IN2 Incubator Program Through 2024
Innovation Incubator Expands Technology Focuses, Number of Start-up Companies
Dec. 1, 2020
Now in its seventh year, the Wells Fargo Innovation Incubator (IN2) is now a $50 million program. It was designed from the start to consider a diverse cross section of start-ups—many of which might appear risky to traditional venture capitalists—collect them into cohorts, connect them with technological expertise, and ultimately accelerate their clean technologies to the marketplace.

In 2014, Wells Fargo and the National Renewable Energy Laboratory (NREL) designed the blueprint for taking promising energy efficiency innovations, de-risking them, and delivering them to market for the benefit of everyone and to accelerate the transition to a low-carbon economy. A couple of years after its original investment of $10 million, Wells Fargo doubled down and pumped an additional $20 million into IN2 and has recently stayed the course with yet another $20 million. But the funding does not end with Wells Fargo’s philanthropy. An important part of IN2’s “ecosystem approach” to accelerating clean technologies involves bringing in other foundations and investors, customers, and cleantech market experts. And it is working. The program enjoys an impressive 33:1 funding leverage rate, meaning that for every dollar Wells Fargo invests in the program, $33 originate in terms of independent investments.

“We were seeking the opportunity to broadly support the cleantech ecosystem with a pretty novel approach,” Ramsay Huntley, sustainable finance strategy leader at Wells Fargo, said. “We looked at the horizon—where is venture capital flowing today and where is it not? We wanted to tune in to where capital was not being deployed. We launched the program with a focus on energy efficiency in commercial buildings because of the shortage of venture capital and the potential payoff in terms of carbon reduction.”

In total, as of fall 2020, the program has amassed $383 million in total investment money, seen seven mergers, and helped create 402 clean energy jobs.

A graphic showing interconnected word bubbles with the names of organizations.
The IN2 network exposes start-ups to a variety of experts, shepherding them and their technologies and products to the energy marketplace.
Companies selected for IN2 join a cohort, averaging about five companies each. E.J. Bernacki, Wells Fargo’s vice president for corporate responsibility communications, made clear the companies in each cohort do not all come from traditional innovation hubs, such as San Francisco, Los Angeles, and New York. IN2 is very intentional about including geography in its mission to inject diversity into decision-making.

In 2014, the program’s inaugural year, IN2 hosted four companies in its portfolio. A year later it added a cohort of six companies and in 2016 a cohort of 10 companies. In 2017, IN2 held a summit at NREL to discuss the program’s future, which ultimately included an installment of $20 million to extend the program and expand its focus. With Wells Fargo’s own aggressive renewable energy goals and approximately 100 million square feet of building space where it could run beta tests or demonstrations for portfolio companies, it made sense to launch the program with a focus on commercial buildings efficiency technologies. By the 2017 summit it had become clear the IN2 model could be replicated to address sustainability imperatives in other areas of the economy.

The new “verticals” the summit identified as priorities were agricultural technology (the food-energy-water nexus), residential technologies that contribute to affordability, and transportation. In 2018, the program announced it would expand to include agriculture technology and bring in the Donald Danforth Plant Science Center as a strategic partner to help select and validate agtech start-ups. In 2019, IN2 selected its first agtech cohort of five companies and later that year included eight residential technologies in its buildings efficiency cohort.

Today, the program has hosted a total of 46 companies with clean technologies focused on commercial buildings, affordable housing, and agtech. With the additional $20 million tranche of funding awarded in 2020, IN2 plans to host two cohorts per year through approximately 2024.

A Trip Through IN2
Companies come to the attention of the IN2 selection committees in multiple ways, including through NREL’s Innovation and Entrepreneurship Center (IEC) channel-partner network, which currently includes the more than 60 incubators, accelerators, and university programs across the country that refer start-up companies for NREL’s incubator and accelerator programs and with whom IEC exchanges information, advice, and market expertise.

“We feel it’s very important to be connected on the front end of the pipeline with channel partners, as well as the back end where we’re connecting our cohort companies with industry, when they’re getting ready to be commercialized,” Trish Cozart, IN2 program manager and IEC group manager, said. “It’s knowing all of those people that’s important to our success.”

Portrait photo of a woman
Trish Cozart, IN2 program manager. Photo by Werner Slocum, NREL
The program measures each start-up company against predetermined criteria, including fit with NREL and/or Danforth Center, which will help guide it through the technical aspects of the journey, and how the technology will help to reduce emissions or deliver other sustainability benefits. Participants must be registered as companies, but Cozart said IN2 takes anything from early-stage, bench-scale ideas and prototype-stage companies to those already at the pre-commercial stage where they are working on establishing manufacturing but have not yet penetrated the market.

After the initial call for applications through the channel partners, an aggressive series of down-selects commences, beginning with a technical evaluation from NREL or Danforth Center scientists, who debate the technologies and reduce the pool to half. The Wells Fargo IN2 board members, who bring expertise in cleantech banking, energy and facilities management, and small business growth, are next. They consider the start-ups that the NREL technology board has suggested and provide an evaluation of each technology’s goals, how it will benefit its customers and the environment, and whether or not the business team appears sturdy.

From there, applicants go to a final selection by an external advisory board. Cozart said this is an important key to the success of IN2. The program now has two external advisory boards—one for buildings and one for agtech, each with 11 people representing a broad swath from industry to academia. These boards narrow the field of 13 start-ups down to the five or six that will ultimately comprise the cohort.

“The external advisory boards for the IN2 program are an essential part of our down-selection process,” Cozart said. “They are made up of industry experts from places like Walmart, Cargill, Auburn University, Corteva, Project Drawdown, DuPont, North Carolina A&T, Tavistock, SOM, Toll Brothers, etc., which look at commercial buildings, housing, or agriculture from a variety of lenses as they serve as the final voice in the selection process. The boards also serve as advisors to the program over time, continually helping the program and the start-ups understand what it takes to get products in the market.”

Neither NREL nor Wells Fargo is involved in that final selection.

Being selected is a big deal and can mean a significant increase in investment funding, not to mention a detailed technical review and prototyping help from experts at NREL and Danforth Center, and in some cases, field testing or demonstration with a strategic program partner.

A graph comparing the rate of investment for companies selected for IN2 and unselected applicants.
Part of IN2’s goal is to increase investment in the companies it selects. Companies selected for the IN2 program show a much higher rate of investment than those not selected.
George Lee, CEO of PowerFlex, one of the IN2 alumni, said, “What we were most interested in is NREL. NREL is name brand, well known for renewable energy research, and we wanted to have NREL involved to bring a certain level of validity to our product. When we can say we worked with NREL and they looked at our technologies, it brings an instant credibility in a sales and marketing environment.”

An IN2 win-win story, PowerFlex’s IN2 project was the validation and deployment of an electric vehicle charging system at NREL’s Flatirons Campus in Boulder County, Colorado. Later, after winning an independent request for proposal, PowerFlex installed more than 100 charging stations at NREL’s South Table Mountain Campus where they help the laboratory manage its electrical load today.

Photo of a man installing electric vehicle charging station equipment in a parking garage.
In May 2019, PowerFlex CEO George Lee applied QR codes to the PowerFlex Adaptive Charging Systems in the NREL South Table Mountain Parking Garage. Employees use an app to scan and bill their energy use to charge their personal vehicles. Photo by Dennis Schroeder, NREL
Innovation Incubator through the Years
The relationship between NREL and Wells Fargo began back in 2011, when Wells Fargo sponsored NREL’s annual Industry Growth Forum. That connection eventually blossomed into a great partnership, resulting in IN2. Huntley said Wells Fargo was identifying areas where it could more deeply engage.

“It really was more about an alignment of missions as well as complementary assets,” Cozart said. “Wells Fargo is highly focused on sustainability, and the foundation and the company itself are working to accelerate the transition to a low-carbon economy and to positively impact the environment. NREL is working to advance science—transforming energy. So, we have these two converging missions and converging assets. Wells Fargo had banking and energy expertise to share and philanthropic capital to invest. NREL was bringing to the table world-class facilities, research, cleantech expertise, industry connections, program management expertise, and a reputation as a trusted, third-party validator of technology.”

Cozart said the program has not changed all that much since the beginning. She said their “ah-ha moment” came when they identified a gap in the technology innovation ecosystem. It was hard tech (not software) where companies often could not raise enough money to get prototypes validated or tested. By offering grants as small as $250,000 for those companies, IN2 could help them bridge that valley.

Huntley said that one thing the program did learn early on was the importance of being very specific about what it asked for when it put out the call for companies to join cohorts.

“We were trying to be very targeted,” he said, “and that’s one way we’ve shown success—through a very targeted approach. We suspected that in the beginning but validated it over time.”

The success of the IN2 model reached a strong validation when Shell followed suit and partnered with NREL to create its Shell GameChanger AcceleratorTM Powered by NREL using the same model.

“The model was good to start with,” Cozart said. “The Shell GameChanger program was based off of IN2, and we’ve had interest from other corporations as well.”

“There’s not one solution that’s going to fix everything,” Cozart said. “Like all innovation throughout history … it’s several small, incremental changes—one great innovation at a time.”