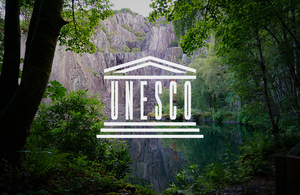 The Slate Landscape of Northwest Wales has become the UK’s newest UNESCO World Heritage Site, having been granted the accolade today, at the 44th session of the World Heritage Committee.

The landscape has become the UK’s 33rd UNESCO World Heritage Site and is the 4th in Wales, following the Pontcysyllte Aqueduct, Blaenavon Industrial Landscape and the Castles and Town Walls of King Edward in Gwynedd.

The Slate Landscape of Northwest Wales, which runs through Gwynedd, became the world leader for the production and export of slate in the 1800s. Slate has been quarried in the area for over 1,800 years and had been used to build parts of the Roman fort in Segontium in Caernarfon and Edward I’s castle in Conwy, however it wasn’t until the industrial revolution that demand surged as cities across the world expanded with slate from the mines at Gwynedd being widely used to roof workers’ homes, public buildings, places of worship and factories.

By the 1890s the Welsh slate industry employed approximately 17,000 workers and produced almost 500,000 tonnes of slate a year, around a third of all roofing slate used in the world in the late 19th century. The industry had a huge impact on global architecture with Welsh slate used on a number of buildings, terraces and palaces across the globe including Westminster Hall in London’s Houses of Parliament, the Royal Exhibition Building, Melbourne, Australia and Copenhagen City Hall, Denmark. In 1830, half the buildings in New York had roofs made of Welsh slate.

Centuries of mining in the area transformed the landscape on a monumental scale with the inscription reflecting the important role this region played in ‘roofing the 19th century world’.

UK Government Heritage Minister Caroline Dinenage said:
UNESCO World Heritage Status is a huge achievement and testament to the importance this region played in the industrial revolution and Wales’ slate mining heritage. I welcome the prospect of increased investment, jobs and a better understanding of this stunning part of the UK.

The City of Bath – originally inscribed on the Word Heritage List in 1987 – has also been awarded a dual designation as part of the Great Spas of Europe.

A transnational nomination, Bath, along with 11 other European spa towns including Baden-Baden in Germany and Vichy in France, has been added to the UNESCO World Heritage List for the second time, becoming only the second place in the UK with a double UNESCO listing.

The 11 towns making up the nomination are all mineral water sources. While Bath has been famous as a spa town since the Roman period, other nominations represent the heyday of European spa towns from around 1700 to the 1930s.

Duncan Wilson, Chief Executive of Historic England said:
We are pleased to see both the Slate Landscape of Northwest Wales and the city of Bath being recognised in the UNESCO World Heritage List. Beautiful Bath thoroughly deserves its rare double World Heritage Site listing. From its Roman remains to its stunning Georgian architecture, Bath is a city which has captivated residents and visitors for centuries. Being inscribed, along with ten other European Spa Towns, as a joint World Heritage Site demonstrates Bath’s importance as one of the earliest and most significant “Great Spas” and we are delighted to have worked alongside international colleagues to make Bath’s joint inscription a reality.