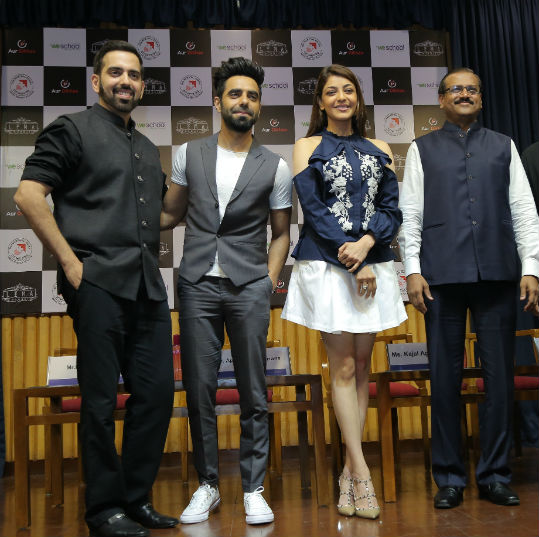 Mumbai: On the auspicious occasion of Rakhsha Bandhan more than 200 WeSchool students donated blood and embarked on an initiative to sensitize the citizens about the significance of blood donation at S.P. Mandali’s Prin. L. N. Welingkar Institute of Management Development & Research (WeSchool) run blood donation drive in association with Tata Memorial Hospital. A six minute short film ‘Khoon Mein Hai’ directed by Kussh Sinha was launched on WeSchool campus in an imposing presence of the star cast which boasts of acclaimed Telugu, Tamil and Bollywood actors Kajal Aggarwal and Aparshakti Khurana of ‘Dangal’ fame, who play main characters in the film. The film in collaboration with WeSchool led blood donation drive, aims to reinforce the social cause of saving lives through blood donation among the youth.

Envisioning the need of the hour, the short film visually puts forth the message that although one takes pride in one’s blood as a legacy of good character and values, no one really seems to care about donating blood. The film hits the right notes by urging viewers that it’s time to do good and donate blood to save lives in times of disaster as well as peace.

While sharing his philosophy behind launching this film, Prof. Dr. Uday Salunkhe, Group Director, WeSchool said, “We always believe in ‘We link and We care’ and feel proud of collectively taking up work that promotes well-being of the society. Through WeSchool initiatives such as ‘Global Citizen Leadership’ we nurture young students with an aim of not just creating business managers but also global citizens with empathy towards all stakeholders. Through the blood donation initiative, we aim to spread the social message and encourage all to show their finest gesture and save a life.”

Present at the event, superstar Kajal Aggarwal waxed eloquent about the importance of blood donation saying, “I donate blood often. As actors we are adulated by fans and receive warm fanfare. Doing short films for a social cause is my best endeavor to support an initiative for the health of the society.”

In a country with such a substantial number of potential blood donors, it is truly heart-breaking to see so many lives are lost due to ignorance and lack of sufficient initiatives and awareness measures. Every 2 seconds someone needs blood, more than 38,000 blood donations are needed every day and according to a recent World Health Organization (WHO), only 9 million units of blood are collected annually as against the requirement of 12 million units. The launch of the film and blood donation drive were WeSchool’s initiatives to inculcate the values of social responsibility in the future leaders of India with the objective of bringing positive changes to the society at large by involving them in a series of constructive socially responsible initiatives.

KhelPlay celebrates 5th Anniversary, gives away 21 lakhs worth of prizes