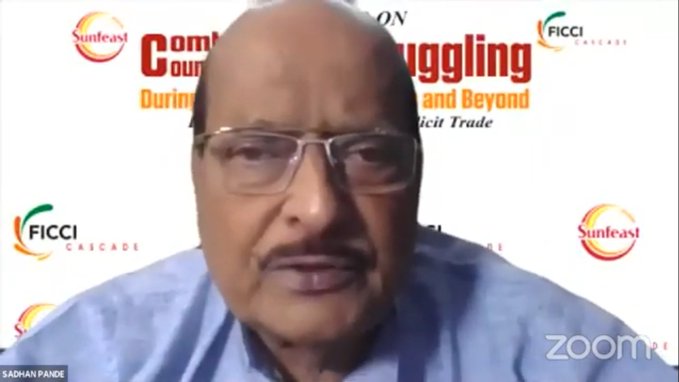 New Dellhi: Mr Sadhan Pande, Minister-in-Charge, Consumer Affairs Department, Govt. of West Bengal, today said, “Counterfeiting and smuggling are two major economic crimes that are happening around the globe and the West Bengal government is making extra efforts to combat such crimes even during this pandemic.

Addressing a webinar ‘Combating Counterfeiting and Smuggling during the COVID-19 pandemic and beyond’, organized by FICCI’s Committee Against Smuggling and Counterfeiting Activities Destroying the Economy (CASCADE), Mr Pande invited CASCADE to join hands with his department to run a campaign on the subject in West Bengal.

Mr Deepankar Aron, Additional Director General, Directorate of Revenue Intelligence (DRI), Kolkata said that smuggling and counterfeiting is the second most significant illegal trade. Citing recent major detections effected by DRI and Customs formations, Mr Aron said that in last one year, 570 kgs of gold valued at Rs 220 crores and foreign currency worth Rs 30 crore was seized. Several cases of smuggled cigarettes were detected where a total of 2.6 crores of cigarette sticks valued at around Rs 26 crores were seized, he added.

Mr Hem Pande, Former Secretary, Dept. of Consumer Affairs, GoI said that the menace of illicit trade is impacting jobs, economy and creating havoc all around the world. “Strengthening enforcement and empowering consumers to combat such crimes should be the constant endeavour,” he added.

Mr Anil Rajput, Chairman, FICCI CASCADE heartily welcomed the enterprising and effective suggestions made by the Minister of Consumer Affairs, West Bengal Government, senior representative of DRI and participants from the Federation for Consumer Association. He said, “I am delighted that a suggestion has been made that the West Bengal government and FICCI CASCADE join hands and work together on the extremely important aspect of consumer awareness. Illicit trade is indeed a big menace, and we all have to work together to eradicate this evil, which has made deep inroads in our country.”

The webinar also highlighted the efforts of the Industry in tackling the flow of illicit products during the current crisis; role that the government and enforcement agencies can play to thwart criminals who are cashing in during the crisis and highlighted areas of concern in consumer safety. The webinar was attended by industry, government officials, officers from the enforcement agencies and stakeholders in this segment.

As businesses suffer during the current crisis, illegal operators are using this opportunity to provide illicit alternatives of goods both online and offline. Hence, arresting the sale of such goods at this time needs immediate and unwavering attention. The webinar focused on the state of West Bengal and was a part of a series of such interactions to be organised across the country by FICCI CASCADE to highlight this issue and elicit response from different states.

Worldwide reports indicate an increase in the availability and type of fraudulent products intended to exploit the fears of consumers. Joint operations by the World Customs Organization, Europol and Interpol have resulted in a significant increase in seizures of counterfeit and unauthorized face masks and hand sanitizers. As per the DRI (Directorate of Revenue Intelligence), the major commodities smuggled outright into India from the eastern and north eastern India, include gold, silver, FICN, cigarettes, black pepper, readymade garments, toiletries and cosmetics, wild life, dates, electronic goods etc.