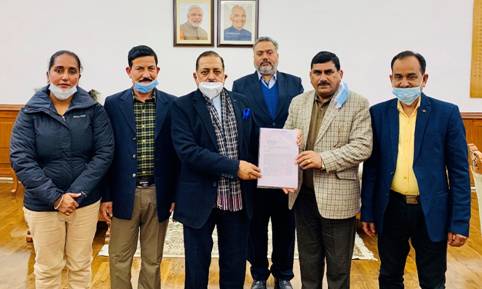 A memorandum submitted to Union Minister of State (Independent Charge) Development of North Eastern Region (DoNER), MoS PMO, Personnel, Public Grievances, Pensions, Atomic Energy and Space, Dr.Jitendra Singh by the President of West Pakistan Refugees Action Committee, Labbha Ram Gandhi stated “during all these 70 years, our generation vanished/perished as we were denied nationality, caste and other certificates by the then Jammu & Kashmir government as they considered us aliens. Resultant, in absence of these documents we were unable to get admission in schools, colleges and professional colleges and did not have even right to vote for the State Assembly. Various representations were made to the State as well Central government by our people but no heed was ever paid to our plight”.

The memorandum further stated that with the abrogation of Article 370 and 35-A and conversion of Jammu & Kashmir from State to Union Territory of India, all the rights have automatically been bestowed upon these helpless West Pakistani refugees. A wave of happiness has run across all these refugees for which the credit goes to the Modi-led NDA government at the Centre.

During a half-an-hour meeting with them, Dr.Jitendra Singh said, it was not only violation of constitutional rights but also violation of human rights of these refugees, who were denied citizenship rights for 70 years just because they had chosen to settle in Jammu & Kashmir whereas two of their counterpart refugees, who chose to settle in other parts of India, went to become Prime Ministers namely Inder Kumar Gujral and Dr. Manmohan Singh. He said, after Prime Minister Modi’s courageous decision, now they will have the same rights as any other citizen of India and their children will get a level playing field in jobs and various other new opportunities being made available by the Modi government.

In another memorandum submitted by Sarpanch, Panchayat HalqaTreva, Balvir Kaur and Councillor Arnia on behalf of the Border SanghrashSamitiArnia, the Modi government was thanked for giving reservation to the people living along International Border (IB) on the same lines as for the people living along LoC (Line of Control). The crucial role played by Union Minister Dr.Jitendra Singh in getting this decision was specially appreciated. In addition, it was pleaded that the Union Territory government should be asked to come forward with some more relief measures for the people living along the International Border. Considering the constraints of the border people, it was requested that the Union Territory government could consider sanctioning a Degree College in the area and certain other facilities as well.

Stellar line up of movies for international competition during 51st IFFI

University of Bremen: Number of people in need of care higher than…