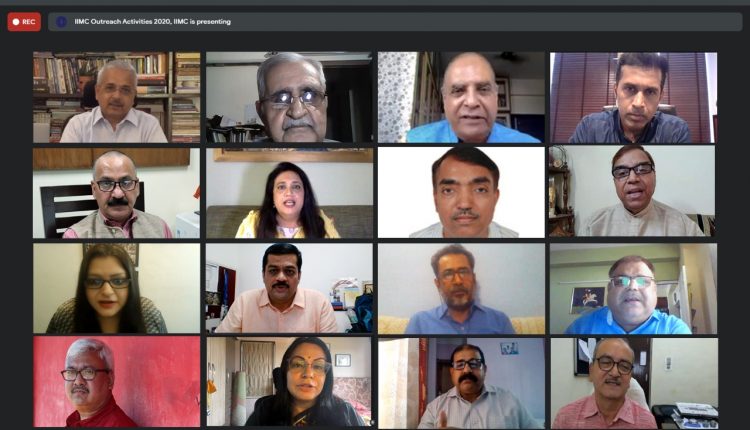 Western media tarnishing the image of India; Daylong discussion at IIMC on ‘Coverage of COVID-19 pandemic in India by Western media’

New Delhi: “There has been a serious lack of sensitivity and responsibility in the coverage of COVID-19 pandemic in India by the international media, particularly the Western media. The foreign media exercised restraint in the coverage of COVID in their own countries, but they presented deaths in India with undue sensation.” These views were expressed by eminent Indian journalists and scholars at a daylong discussion organised by the Indian Institute of Mass Communication (IIMC) today. The topic of discussion was ‘Coverage of the COVID-19 pandemic in India by Western media’. Director General of IIMC, Prof. Sanjay Dwivedi was also present during the discussion.

Presiding over the first session, Mr. Alok Mehta said that in democracy every newspaper has the freedom of expression. It is the duty of the media to cover the crisis during pandemic and make the society aware about the situation. But under the guise of the pandemic, a section of the Western media should not try to defame India. He stressed the need that Indian media should check the facts being published by western media and bring out the truth before the world.

In his keynote address, Mr. Umesh Upadhyaya said during the pandemic, Western media maligned the image of India through baseless stories. The figures related to corona vaccination in India published in some foreign newspapers are far from the reality.

Ms. Smita Prakash said the Western media did not follow the journalistic ethics while covering the Covid-19 pandemic. The international media covered Covid crisis in India as per its preset agenda. Shri N.K. Singh said the work of journalists is to bring out the truth and the media should solely do this with utmost sincerity.

Mr. Anand Narasimhan said we cannot give the right to the media of any country to malign the image of our own country through its news stories. “If the foreign media do not trust the Indian figures related to Covid, then why should we trust their statistics,” he added.

Ms. Advaita Kala mentioned that India has come out as a self-reliant country during COVID-19, but a section of the western media is not ready to accept it. They believe that India’s health system completely failed in the second wave of COVID-19, but they did not say that the cases of infection were increasing at an alarming level in their own countries at the same time. Mr. K.A. Badrinath said Corona was wreaking havoc in many countries of North America, South America and Europe, but the foreign media did not publish pictures of people dying there. They have no qualms about doing so in the context of India.

At the second session Mr. Jawaharlal Kaul argued that the western media has adopted certain regulations to cover their own situation during Covid, but they miserably failed to follow the same regulations in the context of India. He said the foreign media reports have manifested a negative attitude towards India.

Mr. Jaideep Karnik acknowledged that it is the duty of journalists to show the truth with accountability. The foreign media did not show India’s situation in the right perspective during Covid. He said the illusion has to be cleared in our country that foreign media works the best way. Mr. Ravishankar Ravi said when India extended helping hand to the other countries in trouble and provided vaccines and medicines, the foreign media did not discuss it at all. They continued to prominently carry stories related to deaths. It exhibited their double standards.

Mr. Laeeq Rizvi said the dualistic attitude of western media has been there for years now. He said facts are paramount in journalism, but during the coverage of Covid-19 pandemic in India, the foreign media wrote news stories on the basis of social media narratives and not on the basis of facts. Mr. Tehseen Munawar admitted that western media is imbued with a sense of superiority.

Ms. Shefali Vaidya said many countries of the West have gone through the formidable nature of the pandemics that India has experienced. Developed countries like Italy, Britain, Spain and America were also helpless at the peak of infection. The foreign media exercised utmost restraint during the coverage at that time, but there was a lack of support solely in case of India. Mr. Vivek Agarwal underlined the need to understand the funding pattern of the media, because that immensely influences the coverage of news.

Presiding over the second session, IIMC Dean (Academic) Prof. Govind Singh said truth is one and people speak it in different ways. But the prejudiced foreign media presented news in its own way. He mentioned that there is a vast difference between the thinking of the East and the West. It is the responsibility of every institution to show patience and solemnity at the time of disaster.

Introduction of the topic in the event was made by Hod of Outreach Department Prof. Pramod Kumar. The programme was conducted by Prof. Anubhuti Yadav and Prof. Sangeeta Pranavendra. Prof. Shashwati Goswami and Prof. Rajesh Kumar proposed a vote of thanks.