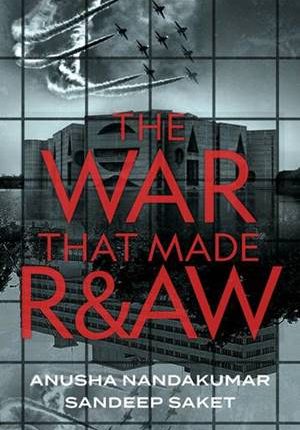 Westland Publications, in collaboration with Golden Pen, announces the release of ‘The War That Made R&AW’ penned by Anushka Nandakumar and Sandeep Saket

The riveting book sees authors Anusha Nandakumar and Sandeep Saket trace the roots of modern Indian espionage and describe the newly formed R&AW’s integral role in the liberation of Bangladesh.

By India Education Diary Bureau Admin On May 29, 2021
Share

New Delhi: Westland Publications and Golden Pen are pleased to launch ‘The War That Made R&AW’, written by filmmakers and writers Anushka Nandakumar and Sandeep Saket. This is an insightful book about R&AW, how it came into existence and the covert operations that were carried out during Bangladesh’s fight for freedom. The book also marks the forty-year anniversary of the Bangladesh Liberation War, that was fought and won in 1971.

Delighted about the launch of this book, Anusha and Sandeep said, “As filmmakers, in any narrative or a cinematic universe, one constantly seeks out a hero. We found one in R.N. Kao. For us, this chapter from history is visually rich, suspenseful, gripping and has been a deeply satisfying tale to bring to life.”

Expressing his delight at the launch of the book, Jaspinder Singh Kang, Golden Pen, said, “This book is an ode to, probably, the most iconic event in the history of our nation post-independence. A war that was fought not only on land, air and sea, but, most strategically, behind the scenes, by our first intelligence agency.”

He added, “The creation of Bangladesh—we can appreciate more so now—thwarted what could have been a threat from East and West. We are absolutely thrilled about Golden Pen and Westland’s joint release of RA&W by Sandeep and Anusha.”

Author and former journalist S. Hussain Zaidi, “This book is an amazing account of historical espionage during formative days of India’s premier agency. Its an incredible research and insightful narrative for those who wants to know about heroes of cerebral warfare that defeated Pakistan and proved India’s power in political arena. Superb debut for Sandeep and Anusha

‘The story of how R&AW was set up, and the organisation’s role in Bangladesh’s fight for freedom, is a riveting one. Anusha and Saket have done a wonderful job chronicling how the great Indian spymaster R.N. Kao, his right-hand man Sankaran Nair, and the rest of the R&AW team, ran their operations at this time, and Westland is very proud to publish this book with Golden Pen.’ – Editor, Westland Publications, Deepthi Talwar said.

Two events in the 1960s underlined the urgent need to restructure and revitalise India’s Intelligence system: the 1962 war against China, and the one against Pakistan in 1965, both shocking instances of failures in information gathering. The officer who would be given charge of this task was R.N. Kao —someone unlike the romanticized ideals of spies in films and novels.

The founder-chief of India’s Research and Analysis Wing lived and operated from the shadows. Understated and gentlemanly, he may not have looked the part, but Kao undoubtedly put Indian Intelligence on the world map.

Kao had one goal, to build an Intelligence-gathering agency that would ensure the security and integrity of India. And, eventually, the legend of the ‘Kaoboys’—the nickname given to the team he built—would spread far and wide. This is the compelling tale of how it started; of covert operations, courage and quick thinking; and of how wars are won as much off the battlefield as on it.

ANUSHA NANDAKUMAR is an independent filmmaker. Her documentary film, The Boxing Ladies, won the National Film Award in 2010 and her short films have been screened at various national and international film festivals.

SANDEEP SAKET has been working in the Mumbai film and television industry for more than ten years. His films have been screened at various national and international festivals.

Anusha and Sandeep are the creators and writers of an untitled thriller series for Amazon Prime to be directed by Rohit Shetty.

Golden Pen, a partnership between best-selling author and former investigative journalist S. Hussain Zaidi and Jaspinder Singh Kang, an international marketing consultant, was started with the core thought of ‘enhancing the quality of crime noir and intriguing tales.’ Since its inception in 2018, the partners have been identifying, screening, mentoring, nurturing and promoting writers, both known and new. The embodiment of their credo—Writers First. With the growing need for quality content in various media, Golden Pen is a one-stop ‘content curation’ shop in the crime/thriller genre, under the umbrella of S. Hussain Zaidi Presents.

Focusing on the core competence has fast-tracked the company into developing double-digit content for its valued partners like MatchBox Pictures, SLB Productions, Endemol Shine India, Azure Entertainment and MyFM India amongst others. These works are adaptations of existing material as well as creating custom-made originals.

Hussain Zaidi is known for his gritty and no-holds-barred representation of the criminal underbelly in books. After being an investigative journalist for 25 years and writing 12 bestsellers, Hussain Zaidi has now begun mentoring aspiring authors who have the ability to write but lack the wherewithal to launch themselves. Some of his protégés have already seen their books getting adapted for digital media on Netflix and other platforms.

Jaspinder Singh Kang, an international marketing consultant with over 25 years’ experience in corporates and media productions, is the marketing and commercial brain behind Golden Pen. Golden Pen wants to develop content that pushes the boundaries on every page or in every frame while being deeply rooted in reality. In the first year of its inception, the company has blazed a successful trail of several strategic accomplishments. The company plans to continue on the course that it has set for itself and further expand its talent pool as well as partner base by tying up with more producers and production houses.