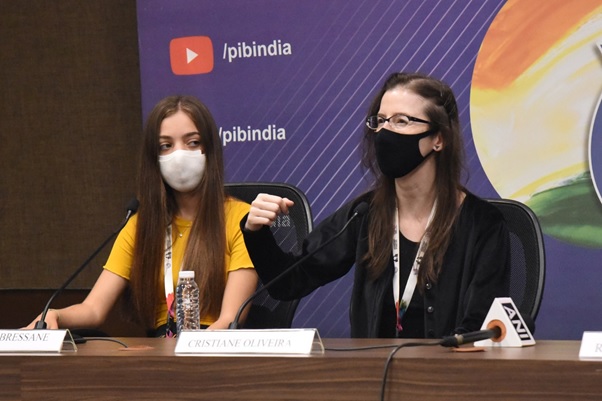 Why did she live and die a 70-year-old virgin: The First Death of Joana

Panaji: A quest to unearth the enigmatic life of a woman who never sought to enter into a romantic relationship with anyone and died a virgin at 70 years old. This is what inspired Portugese Director Cristiane Oliveira to make The First Death of Joana / A Primeira Morte De Joana, which had its World Premiere yesterday, at the 51st International Film Festival of India, being held in Goa. Addressing a press conference today, January 23, 2021, Oliveira said: “My film is based on the true story of a woman artist who lived her life on her own terms and died without having a romantic relationship with anyone. While she was very close to me, her life remained a mystery to me. Hence, I started researching more on her past. And thus, the movie was born.”

It is a 13-year-old girl Joana, who is fixated by the need to unravel the mystery of her celibate great aunt Rosa. Encouraged by her friend Carolina, Joana embarks on an investigation about Rosa’s past, which brings her into a clash with the conservatism around her. Joana discovers how the women in her family live out their sexuality. She has no choice but to plunge into her imagination to find her own answers. However, when rumours surface in their small town that Carolina had her first kiss with a girl, the growing intimacy between the two friends disturbs and fascinates Joana.

Oliveira informed that in making the film, she and co-writer Sílvia Lourenço have combined their personal experiences with the real-life experiences of this woman who inspired them.

The film has been presented in the World Panorama section of the festival.

Set in 2007, the 2021 film was shot in picturesque locations in Southern Brazil. Cristiane was excited to speak about the features of the shooting locations: “The movie is shot in a very special place comprising 20 lagoons which are connected to each other. The landscape in this place is filled with wild contrasts, as you will see big lagoons next to virgin forests and mountains.”

ILO to release new report on future of work in Least…

The reason why she zeroed in on the place is connected intimately with the storyline as well. “The installation of the wind power plant resulted in some kind of a modernisation of the place. It gave it a fresh look, the landscape got changed. Then, I realised that the place is apt for our film, as it deals with the interesting scenario of a woman who was changing herself.”

Isabella Bressane, who plays Carolina in the film, shared her response to the opportunity she got to do this role. “For me, it was magical to be chosen for the role. I learned a lot working with fellow actor Letícia Kacperski who plays Joana, we being of the same age. Being my first movie, this has indeed been a great experience.”

Isabella says she identifies herself with the character as both she and the character she plays are courageous and curious. “It was something very new and real for me to be part of a film. I had registered with theatre before and now, after acting in this movie, I know what I want to be.”

When asked about the influence of Berlin and Germany in her movies, Cristiane points out:
“Brazil was ruled by Germany during the colonial era. I am from South Brazil, which is mostly influenced by a mix of these cultures. The situation in Brazil is sometimes not conducive for artists. So we artists go to Berlin and try to make a living there. In fact, Brazil has a good cooperation with Germany.”

It has been a big change for them to be at IFFI, says Cristiane. “Acceptance of our film at the festival came as a big surprise to us. We are glad that the festival is being organised by a government which accepts films like ours that address issues concerning gender and sexual orientation. I congratulate all of you for organizing a festival like this and for giving us a platform to discuss these sensitive subjects.”

Oliveira made her debut in feature films with NALU ON THE BORDER (Mulher do Pai), a Brazil-Uruguay co-production that premiered internationally at the Berlinale 2017 and won 18 awards at 21 national and international festivals. The First Death of Joana is her second feature film and she is currently working on her third feature titled UNTIL THE MUSIC IS OVER.

Otto the Barbarian highlights mental health issues that society does not know how to deal with: Director Ruxandra Ghițescu

Culture of Giving, gives us more pleasure than of gathering: Prakash Javadekar