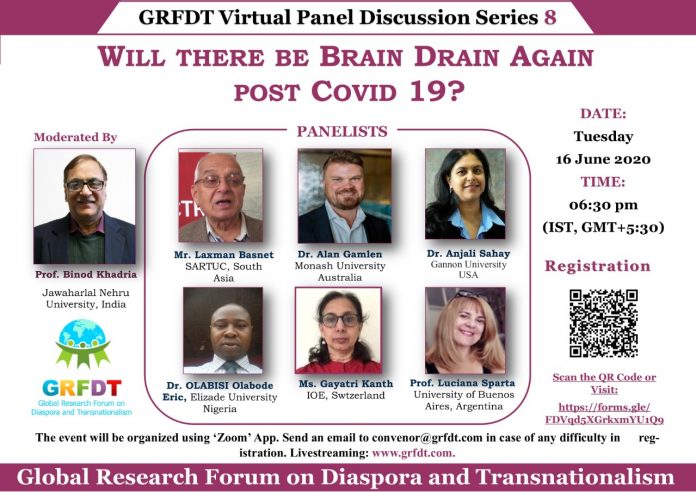 The COVID-19 Pandemic, although primarily a health issue has managed to cut across all sectors of societal and economic life, bearing multidimensional impacts. In light of this, the Global Research Forum on Diaspora and Transnationalism (GRFDT), a New Delhi based policy and academic think tank, hosted a webinar to examine a probable migratory implication of the pandemic, Brain Drain. The webinar, titled ‘Will there be Brain Drain Again Post COVID-19?’ featured panelists and participants from various regions and was moderated by Prof. Binod Khadria, professor of economics and education, Jawaharlal Nehru University.

What are the Determinants?

In kicking off the panel discussion Mr. Laxman Basnet, General Secretary, SARTUC, Nepal highlighted the migration of workers from South Asia to countries in the Middle East and Malaysia, making South Asia largest supplier of contract workers to the Gulf Cooperation Council (GCC) region. He noted that despite the expectation of an avalanche in the Americas, Middle East and Europe as regions of destination, this may not necessarily be the case as people are waiting to first understand the new economic agenda that will emerge as a result of the pandemic. In his opinion however, brain drain is bound to continue to developed countries due to the conditions in countries of origin, particularly in South Asia, and the lack of institutional capacity to absorb highly educated people and low skilled workers. Expanding on this, he mentioned the apparent neglect of the needs of workers by government and employers in countries of origin, a situation which was only brought to fore due to the conditions of these workers during the pandemic. This situation, he juxtaposed with the conditions of migrant workers in developed countries, whose rights were protected and whose conditions were better off. These migrant workers, he noted, were mostly unwilling to return to their countries of origin. Mr. Basnet expressed little hope for structural change in government

concerning employment and rights of workers and this, in his opinion, will result in brain drain to developed countries. Prof. Khadria pointed out an early indication of the likelihood of a brain drain post COVID-19, which was the exemption of healthcare workers from the recent suspension on return of Green Card holders to the US.

Ms. Gayatri Kanth, International Organisation of Employers (IOE), Geneva, articulated that talent naturally gravitates towards places that provide an environment for economic growth, that enable ease for enterprise, attract investment and nurture achievements. She pointed out key drivers of the mobility of skills to developed countries, which include the aging population and skills availability and gaps in these regions necessitating the reliance on skilled migrants. In her opinion, COVID-19 may widen the skills gaps which will need to be filled possibly resulting in brain drain. According to Dr. Alan Gamlen, Monash University, Australia, we must consider key variables that are likely to determine the outcome. These variables include change in demand for immigration, change in migrant decision-making and the openness or restrictiveness of migration policies. Expanding on this, he projects that the demand for migrant workers in developed countries would dwindle in view of unemployment rates which have skyrocketed as a result of the pandemic. This new development is likely to mount pressure on companies to employ native workers over migrant workers, causing developed countries to be least dependent on migrant labor.

The impact of the pandemic on the job market will however differ from country to country dependent on the essential nature of the skills involved. High and low skilled jobs in sectors such as healthcare, infrastructure, maintenance, food production and delivery which are considered essential may lose lesser amount of jobs and as such continue to retain migrant workers. Migrant decision making may also be impacted by the pandemic as some people might be less willing to migrate due to the risks involved while others who need to flee livelihood collapse or political instability  might be willing to migrate. As a result of these variables, what we can be anticipated

Dr. Anjali Sahay, Gannon University USA, in agreement with Dr. Gamlen, opined that it may be too early to draw broad conclusions with respect to migration trends. She also noted that migrant’s decision making powers may be limited post COVID-19 due to restrictions placed by government, firms or those forced by the nature of the virus. She projected that highly skilled workers will move to countries that offer universal healthcare insurance, stable visa process and status. Dr. Sahay also added that the political and economic climate in respective countries such as the upcoming elections in the US may influence immigration policies and consequently migration flows.

Drawing from Argentine history, Dr. Luciana Sparta, University of Buenos Aires, Argentina, expressed certainty at the possibility of a brain drain in Argentina post COVID-19. She noted that since the 1980s, the concept of brain drain has been constant in the country, the only changes being the factors responsible for brain drain. Presently, the economic deterioration of the country contributes majorly to the emigration flows. She shared that the most recent devaluation of the currency has led many people in Argentina to make plans to emigrate once flight travels are resumed in the country in September. This trend of decision-making is also aided by the fact that many Argentines hold dual citizenship in other countries in Europe and therefore have the option of seeking jobs there.

Importantly, as Ms. Kanth highlighted, global governance efforts which have been instrumental in addressing some of the impacts of brain drain, may be impaired as a result of the pandemic as countries seek to make decisions favorable to their economies.

To effectively address the possible migratory impacts of the COVID-19 pandemic, Dr. Sahay encouraged policy makers and countries in the developed world to recognize that they also risk brain drain if they fail to cater to migrant populations who are an integral part of their development. Dr. Amba Pande and Prof. Walton-Roberts suggested that countries put in place policies to regulate the emigration of workers as India is doing with the restriction of mobility of physicians to the US and of Nurses to the GCC to prevent brain drain. Ms. Kanth advised that countries take account of their skills gap particularly those in the pathways of migration. She further encouraged countries of origin and destination to explore the option of skills partnership on the mobility of skills as a way of ensuring that the mobility of skills do not improve the growth of one country at the expense of another. A great example of skills partnership is the agreement between India and Japan. According to the agreement, India provides caretakers to Japan and the country does this by training its graduates periodically to provide personalized care to the elderly population in Japan. These graduates are then sent to Japan to work for a period of 3 to 4 years after which they return to India who sends another batch of caretakers. These agreements provides a mutually beneficial way for India to maximize the potential of its young population and for Japan to meets it skills demand.

In concluding, most of the panelists agreed that the pandemic may not immediately result in drastic changes in international migration. However, for a brain drain comeback to be avoided in the long term, the above issues must be addressed and the policy recommendations made, implemented.