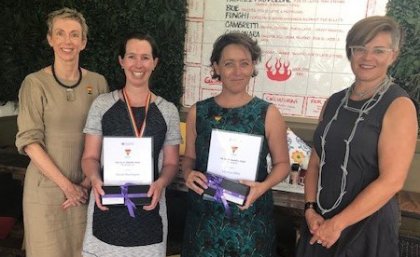 LGBTIQA+ Allies make an important contribution to the university and wider community by creating a safe, welcoming and inclusive space for sex, gender, and sexuality diverse people.

Dr Rebecca Olive from the UQ School of Human Movement and Nutrition Sciences won the prize after a nomination from her peers which demonstrated the impact of Dr Olive’s allyship to LGBTIQA+ people within her research, teaching, and service.

Colleagues at the university and students contributed to Dr Olive’s nomination. They wrote that Dr Olive is a powerful academic role model who has had a positive influence on inclusive teaching practices, research projects, and enhanced student experiences at the university.

“Being part of the UQ Ally Network has been one of the highlights of my work as an academic at UQ. Being an Ally requires me to put the ideals of diversity and inclusion that I advocate for in my research into practice across all aspects of my research, teaching and everyday life,” Dr Olive said.

“Ally work is not something we should ask for credit for but reading the nomination from my colleagues reminded me that being a visible Ally has important ongoing effects. Seeing this outlined in the words of people, who are such good allies themselves, was meaningful and motivating.”

Executive Dean (Humanities and Social Sciences) and Ally Executive Champion Professor Heather Zwicker said that the nominations for the UQ Ally Award demonstrated that people valued the contribution of allies in their workplace.

University of Warwick: Emerging from Lockdown: The Coventry…

“It is fantastic to see that the work of our allies doesn’t go unnoticed. People see and appreciate their outstanding work as they help make our university a welcoming, inclusive space for LGBTIQA+ people,” Professor Zwicker said.

The runner-up this year was Dr Nicole Warrington of the UQ Diamantina Institute.

A UQ Ally for just eighteen months, Dr Warrington has already championed rainbow issues by fundraising over $700, arranging events for ‘Wear it Purple’ Day, and coordinating the first Ally training sessions at the Translational Research Institute in 2019 and 2020.

Dr Warrington said that it was an honour to be recognised as runner-up for this award.

“I am very proud to be part of the UQ Ally Network, which has opened my eyes to the issues faced by the LGBTIQA+ community within the workplace,” she said.

“I hope my small contributions have made the community feel like the UQ Diamantina Institute is a welcoming place to come to work.”

These outstanding allies were joined by seven other nominations from across the university. Each nomination profiled the inspiring contributions made by our UQ Allies as they lead from multiple levels and fostered supportive environments for students and staff.

Sign up to UQ’s award-winning Ally Network. The Network fosters a safe, welcoming and inclusive space for sex, gender and sexuality diverse people at UQ and in the broader community. UQ staff can join the Network by completing the training.

University of Warwick: Emerging from Lockdown: The Coventry Grid Project 2021