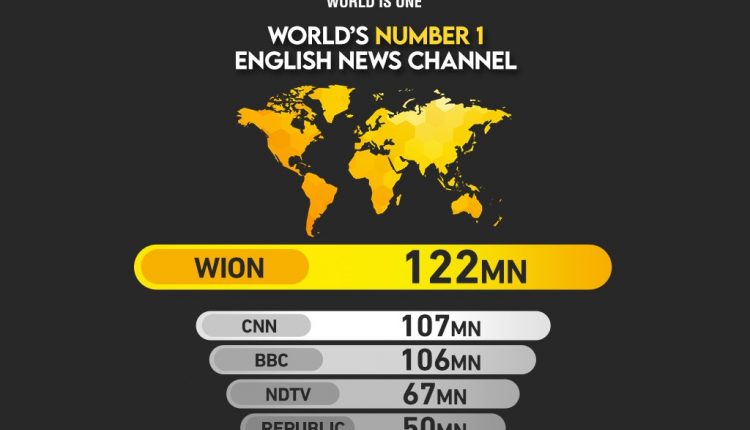 New Delhi : WION- ‘World is One News’, India’s digital-first international news channel has become the world’s number 1 English News Channel. In an overwhelming feat recently, the news channel has topped the chart surpassing the other established news channels like BBC,CNN,Al Jazeera, NDTV, Republic and Times Now that have been on the air for quite a long time now. WION, which has just celebrated its 5 years of existence, continues to excel in International news reporting.

Quantum sensor can detect electromagnetic signals of any…

Transforming the age-old pattern of western narratives on world issues, WION has been instrumental in becoming the voice of a new India bringing the Indian perspective to the global news stage.

WION has been leading a wave of global change through various carefully crafted platforms for staging opinions of world leaders through WION World Summit editions such as DUBAI 2019, 2020, 2021 editions, U.S.A In collaboration with Columbia University 2019 and China Decoded Virtual Edition 2020 and various local summits such as E- Mobility Summit, Mission Smart Cities 2020 and Education Summit. WION is coming up with the 5th edition of the world global summit soon.

With highly fact based and well researched programs, WION has been scripting great success stories. Whether it is Gravitas, interview based shows such as Global Leadership Series, The Interview, The Diplomacy Show, Straight Talk and Top Stories; concise news shows such as Top Stories, Dispatch, and Playlist and Speed news. In the Global Leadership Series, State heads like prime ministers, ex-prime ministers, presidents, ex-presidents of the world get featured.

Commenting on the success Palki Sharma Upadhyay, Executive Editor of WION News said, “Within such a short span of time WION has emerged as a market leader by presenting news with a completely fresh perspective. The brand has witnessed 90 percent growth in users in the last six months and has been reporting 4.88x growth year on year**. The growing digital reach and engagement data clearly reflects there’s an audience for research-based, intelligent news content.”

‘AIMRA 7th anniversary – Contributing back to the Society 11th September 2021’

Quantum sensor can detect electromagnetic signals of any frequency

MIT-led team has built a new system that rapidly scans the genome of cancer cells,…

iednewsdesk Jun 27, 2022
The WA Centre for Rural Health (WACRH) of The University of Western Australia will use new funding from the…

University of the Western Cape: Gardeners in South Africa may hesitate…

University of the Witwatersrand: Light travelling in a distorting…