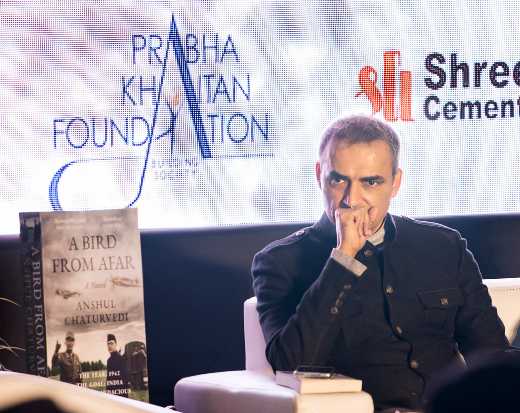 With A Bird From Afar, I ended up writing the book I’d always wanted to read – what would Subhas Chandra Bose have done if WW2 had gone differently: Anshul Chaturvedi

New Delhi: It was an evening of history lessons and lively discussions as senior journalist Anshul Chaturvedi’s debut historical fiction novel on Subhas Chandra Bose, titled A Bird From Afar, was launched by NITI Aayog CEO Amitabh Kant in Delhi on Wednesday at the week-long Kitaab Festival organised by the Prabha Khaitan Foundation, presented by Shree Cement, and in association with India International Centre.

Marketing maven Suhel Seth and National Award-winning filmmaker Nila Madhab Panda were special guests on the occasion, who took part in a discussion on the book along with the author and Mr Kant.The book, Chaturvedi’s fourth, is a fictional narrative of “World War 2 going differently at critical moments in 1942, and Subhas and his Indian Legion raised in Germany exploring if that presented an opportunity to ‘Chalo Dilli’”.

About his inspiration behind the book, Chaturvedi said, “Subhas Bose is many things to many people, and attracts a range of extreme emotions – but, to me, he is, in a distant way, of course, someone I empathize with, am almost fond of. I cannot find one easy and conflict-free phase of his life. I cannot find easy, obvious or universally acceptable choices coming his way. And I admire the manner in which he faced the endless series of conflicts and dilemmas life sent his way, almost in an assembly-line fashion, without, at any point, being a man of compromise or adjustment. And I admire even more how, instead of being nothing more than a man of steel forged by all those fires, he retained and sustained his sensitivity, his concern, his inclusiveness, his objectivity. Like so many, I too have at some points mulled over some or the other “if this had been” aspect of his life. ‘Yun hota to kya hota….’ Given that I have been almost an obsessive consumer of WW2 for decades, even as I read (and wrote a little) about Subhas, over time, the mind drew up its own stories, its conjectures, its responses to ‘what would Subhas have done if – ?’ And at some points I searched for some such stories to read, stories such Robert Harris’s fabulous Fatherland, in the Indian context. A space to re-imagine, reconstruct. I could not find much, perhaps because there is in any case so much mystery, intrigue and speculation about the details of his real life. And then, I somehow ended up writing the book that I wanted to read.”

He added, “The big names in our country – political, social, philosophical – they are often so big that we do not aspire to emulate them, we instead worship them. Worshipping them at the end of what they achieved is not really understanding them. We perhaps don’t humanise them enough – their journey, their difficulties, their failures were as much a part of what made them what they were. There was so much that Bose did that is not talked about enough, including his ability to have civilised conflict with people he disagreed with. That is the space I sought to enter.”

Speaking about the book, Kant said, “It is a tremendous reading, because of the subject he (Chaturvedi) is dealing with. And he deals with it with a lot of compassion. Imagine the ethical dilemmas that Subhas Chandra Bose was undergoing, he wanted to free India and so had to work with the Nazis. All these dilemmas have been brought into the book with such fascinating details. The book brings out Bose’s character, uniqueness and commitment to the freedom of India. It’s one of the finest books I have read in recent times.”

“What do you say about an author who uses research to then craft a narrative that’s mired in fiction?” asked Seth as he discussed the book with the audience. “Authors are made up of craft, compassion and empathy. I was born and raised in Calcutta and Netaji is very special to all of us. Where the book scores is that it not only defines the persona of Netaji, but also his purpose. Very few books do that. We remember stories, we don’t remember slogans. When history is conveyed anecdotally, it tends to be remembered more. That is why very few historians make for great authors, because what they miss is the craft and the narrative, and more importantly, the story-telling. Where this book again scores, is that it gives you an insight into a historical perspective, yet retaining the base of story-telling and the memorability of the anecdotal references.”

Adding to the discussion, Nila said, “Going back to history, reading someone’s mind like this, it is very daring. It is incredible. I have never read historical fiction, this is my first one, and hats off to Anshul – this is a gorgeous, gorgeous book.” Discussing Bose, both Bengal-born Seth and Odia filmmaker Nila, also jokingly laid claim to the nationalist hero on behalf of their home states – Bose, though a Bengali, was born and brought up in Cuttack, then part of the Bengal Presidency and present day Odisha.

Concluding the session, Chaturvedi read out an excerpt from the book’s Author’s Note, “For his followers and fans, Subhas is a romantic idealist, a man who can do no wrong; for his critics, his alliance with Nazi Germany and Fascist Italy is the definitive sin for which the rest of his life is not enough redemption. To me, he is someone who had a single-minded purpose right from his days as a student, and he stayed with it throughout, all means justifying the end, that end being the liberation of India…”

The book is available on Amazon.com and at leading bookstores.

iednewsdesk Jan 21, 2022
Twisted nanoscale semiconductors manipulate light in a new way, researchers at the University of Bath and the…

University of Michigan: Nanostructures get complex with electron…

University of Michigan: Obesity in mice lowered by increasing effects…

University of Michigan: Lack of information related to pollution…