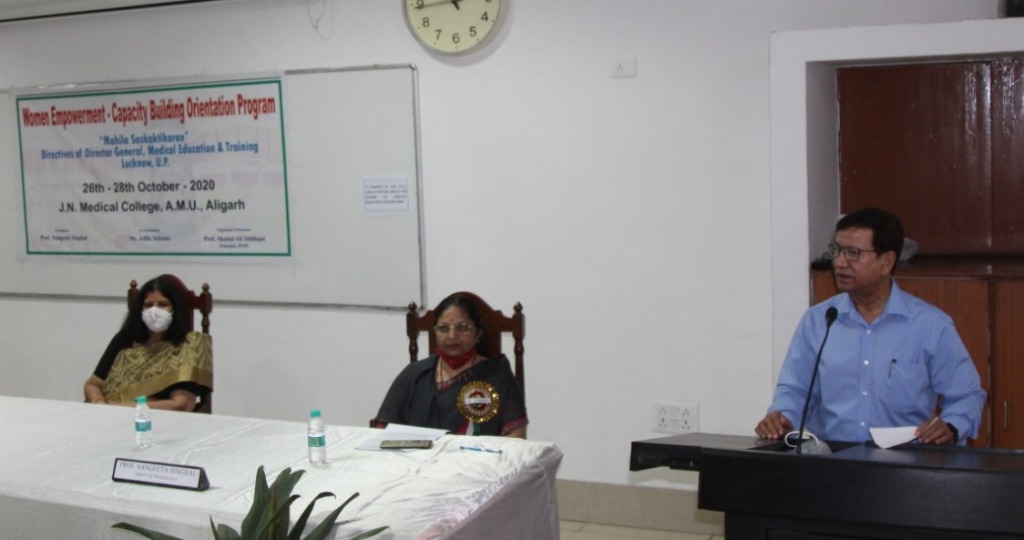 Aligarh: “Gender equality is the first step towards women empowerment and this is enshrined in our constitution that gives us power to frame policies and programmes accordingly,” said Professor Shahid Ali Siddiqui, Principal, JN Medical College, Aligarh Muslim University (AMU).

He was speaking in the inaugural session of the three-day “Woman Empowerment-Capacity Building Orientation Programme, Mahila Sashaktikaran” organised at JN Medical College, under the directives of Director General, Medical Education and Training, Lucknow, UP.

Emphasising on the need to change the mindset of male dominance in society, Prof Siddiqui, the Organising Chairperson of the programme said, according to the census of 2011, female literacy rate in India is merely around 60% compared to the male literacy of 80%, which is a cause for concern as educating a female child is like educating the family and entire society.

Prof Shahhid Ali Siddiqui added that India tested an anti-satellite weapon in March 2019, during an operation code-named Mission Shakti, in the same way Mission Shakti initiative has been launched by the Government of Uttar Pradesh to sensitise the police and general public to women’s safety.

Prof Naima Khatoon, Principal, Women’s College, AMU, and chief guest of the inaugural session said that women should be made part of the decision making process in every body and at every level.

Giving an example she said, “Hansa Mehta was the woman member who ensured a gender sensitive language in the document on Universal Declaration of Human Rights. She served as the Indian delegate to the UN Commission on Human Rights.”

Elucidating the role of education in women empowerment, Prof Naima highlighted the services rendered and resistance faced by Sheikh Abdullah in establishing Women’s College in Aligarh.

“If you don’t empower the women of your community, one tyre of the bicycle will remain punctured and no progress can be made without correcting this fault”, emphasised Prof Naima Khatoon.

She lamented the lack of political will in giving reservation to women in the Indian Parliament. “Women leaders at the helm of affairs in several countries have proven themselves more successful in dealing with Covid-19 pandemic and other human crises as they are more sensitive; and Human Development Index (HDI) is far better in such countries”, further added Prof Naima Khatoon.

Earlier in the day, Prof Rakesh Bhargava, Dean, Faculty of Medicine, AMU, said, there is a huge gender gap in our society and to bridge this gap female education should be given top priority.

“Along With political and economic empowerment we have to have a psychological support system also so that women feel safe. In this context help desks in police stations across the state of Uttar Pradesh is a good initiative which is part of ‘Mission Shakti’ campaign, launched by the government”, added Prof Bhargava.

Prof Sangeeta Singhal, (Chairperson, Department of Physiology, JN Medical College, and Coordinator of the programme) delineated the objectives of the programme and conducted the proceedings.

The three day programme will culminate on October 28, with distribution of certificates.