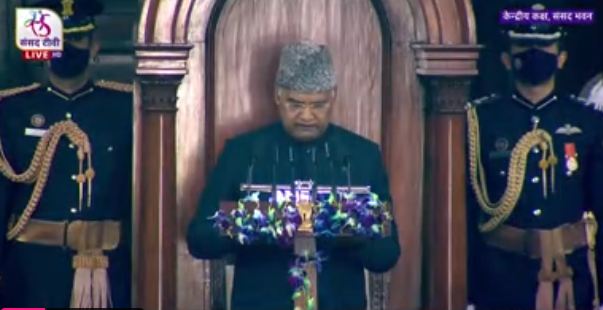 New Delhi: President of India Shri Ram Nath Kovind addressed the joint sitting of the two Houses of Parliament, here today. The President, in his address, highlighted the various initiatives taken by the Central Government for women empowerment, to provide them new opportunities for employment and equal participation in various fields.

In his address the President said “Women are playing an increasingly important role in providing impetus to rural economy. Banks have extended financial help to the tune of Rupees 65,000 crore to more than 28 lakh Self-Help Groups in 2021-22. This is four times the amount extended in 2014-15. The government has also provided training to thousands of members of the women self-help groups and made them partners as ‘Banking Sakhi’. These women are delivering banking services to rural households at the doorsteps”.

The President stated “Women’s empowerment is one of the top priorities of my government. We are all witness to the success of Ujjwala Yojana. Entrepreneurship and skills of the mothers and sisters of our country have been promoted through the “Mudra” scheme. “Beti Bachao, Beti Padhao” initiative has yielded many positive results, and there has been an encouraging improvement in the number of girls enrolled in schools. Treating sons and daughters as equals, my government has also introduced a Bill to increase the minimum age of marriage for women from 18 years to 21 years at par with men”.

“The government has made a beginning to liberate the society from the manifestly arbitrary practice of Triple Talaq by making it a criminal offence. Restrictions on Muslim women from performing the Haj only with Mehram have also been removed. While about three crore students from minority communities were provided scholarships prior to 2014, my government has provided scholarships to 4.5 crore such students since 2014. This has led to a significant reduction in the school dropout rate of Muslim girls and an increase in their enrolment”, stated the President.

The President said “A provision has also been made for Gender Inclusion Fund in the National Education Policy to promote learning capability among our daughters. It is a matter of happiness that all the existing 33 Sainik Schools have started admitting girl students. The government has also approved the admission of women cadets in the National Defence Academy. The first batch of women cadets will enter the NDA in June 2022. With the policy decisions and encouragement of my government, the number of women personnel in various police forces has more than doubled as compared to 2014”.