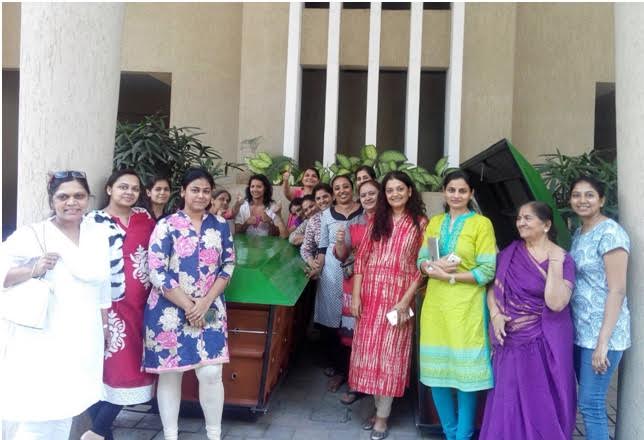 Mumbai: At a time when the city’s dumping ground are getting choked to capacity and the Brihnamumbai Municipal Corporation (BMC) has been hunting for a solution, a noble initiative by a group of 20 women from Marathon Onyx in Mulund and Marathon Group (Real estate developer) has a way out for this problem. After successfully recycling the waste generated in their society, the women have brought down the amount of waste sent to the dumping ground from 35kgs per day to almost nil.
The group has been able to implement this one of a kind measure through proactive participation from all its residents. The residents learnt about the program through Marathon Group, who in association with CREDAI MCHI have been implementing the latter’s Clean City Movement for the first time. Inspired by CREDAI National’s initiative under the Clean India program of Prime Minister Narendra Modiji, and by taking the assistance of CREDAI Kerala at Kochi, Marathon Group brought the initiative before the residents of the society. CREDAI Kerala at Kochi supported and provided guidance to the residents. Once the residents were informed about the importance of recycling waste, they happily supported the movement.
The program was led by Mrs Rakhee Mehta a resident of the society who first took lessons on waste recycling from a Kochi (Kerala) based organisation. As opposed to the conventional method of waste management using vermiculture; the organisation offers a twin Bio-bin system- an organic and sustainable way of managing waste.

Nearly completing a year since the program was first started, the society has been successfully generating 1511 kgs of manure from the total 4583 kgs of wet waste, which is 33 percent of the wet waste. 1020 kgs of dry waste that is generated is given away to be recycled. Only 5-6kgs of non-recyclable and non-bio degradable waste is sent to the dumping ground on a daily basis (which mainly includes sanitary waste like napkins and diapers).

President presents the Dr. Ambedkar National Awards for outstanding contribution to the promotion of social understanding and for the upliftment of weaker sections of the society