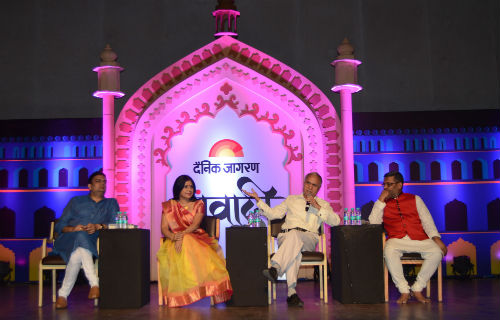 Lucknow: Some of the best names in the country have gathered on the first day of the fourth Dainik Jagran Samvadi, a three-day festival celebrating the power of expression in Lucknow’s Bhartendu Natya Academy. The festival will go on till Sunday.
The festival commenced with the inauguration by Vishwanath Tiwari, President, Sahitya Akademi. Mr. Tiwari said that expression and communication was important for a harmonious world and that there would be violence without it. Present as the Chief Guest, Deputy Chief Minister of Uttar Pradesh Dr. Dinesh Sharma highlighted the importance of communication between a political leader and the public.
In his inaugural address, Sanjay Gupt, CEO of Jagran Group and Editor-in-chief Dainik Jagran said, “Dainik Jagran Samvadi encourages us to communicate and express in Hindi or one’s mother tongue. Hindi is not merely a language, but it denotes a culture, a civilisation. For the people in the north India, it is very close to the feeling of being an Indian.”
The first session of the day, ‘The disappearing heritage of Awadh’ had Malini Awasthi, Yatindr Mishr and Ravi Bhatt. Veteran folksinger Malini Awasthi said, “Nowadays, parents don’t teach the folksongs to their children. In a society where Hindi is neglected, who would care about the dialects?” Author Yatindr Mihr said, “I don’t write in Awadhi because there is nobody to read it.”
The next session featuring politicians Priyanka Chaturvedi, Pankhuri Pathak and Shazia Ilmi was titled ‘Politics, Women and Sex’. National Spokesperson of Congress Priyanka Chaturvedi said, “Women politicians have to face sexist comments, no matter which party they belong to.” Pankhuri Pathak, National Spokesperson, Samajwadi Party said, “A BJP leader insulted me during a debate on the national television. I came outside and began crying. I didn’t know how to react.”
A session on ‘Literature and Nationalism’ involved National Book Trust’s Baldev Bhai Sharma, Neerja Madhav of All India Radio and Professor Jagdishwar Chaturvedi. Baldev Bhai Sharma said, “It is unfortunate and tragic that when the governments change, the topics in Hindi literature also change as a result of it. I don’t want the government to decide what I should read or write.”
Talking about the stories from the small town being showcased on the big screen Vani Tripathi, Adwaita Kala ,Pankaj Tripathi ,Vineet Kumar Singh. The session was moderated by seasoned film critic Ajay Bramhatraj.
The day came to a thunderous close with Dastangoi by Fauzia and Fazal. They recited anecdotes from the epic Mahabharata and enthralled the audiences with their exceptional storytelling.

Need to extend reservations for women in Parliament and Assemblies on lines of Panchayats: Vice President