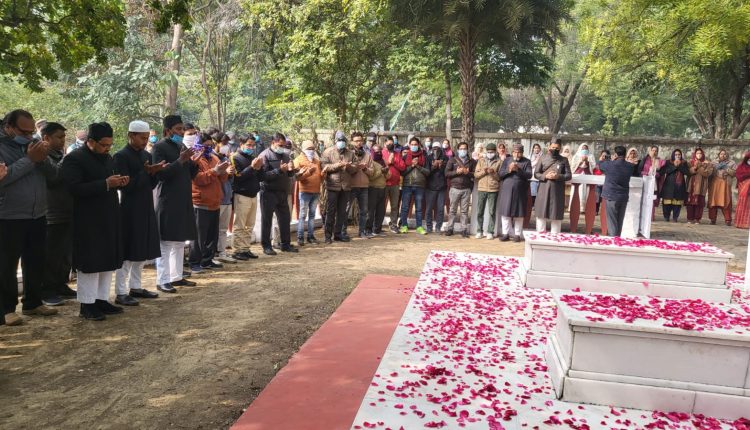 ALIGARH  : The founder of the Women’s College, Aligarh Muslim University Sheikh Mohammad Abdullah and his wife Waheed Jahan Begum, popularly known as Papa Mian and Aala Bi respectively, were paid rich tributes on the day of their conjugal tie, which is also celebrated as the Founder’s Day of the Women’s College. A Fateha Khwani and Dua ceremony was held at their graves to mark the day, which was attended by all the teachers and non-teaching staff of the college.

In her address, Professor Naima Khatun (Principal, Women’s College) said that Sheikh Mohammad Abdullah and his wife, Waheed Jahan Begum’s wedding day is celebrated as the founder’s day of the Women’s College in recognition of their extraordinary services in the establishment and development of the Women’s College. Both of them rendered invaluable services for the promotion of women’s education, especially for the educational advancement of Muslim girls.

Professor Naeema Khatun said Sheikh Mohammad Abdullah and his wife jointly opened a small institution in the name of a women’s school in the upper fort locality of Aligarh city in the year 1906, which later developed into the present Women’s College where female students from all over India and abroad get higher education. She said that the college is an expansion and development of Sir Syed’s educational movement.

On this occasion, prayers were also offered for the three late teachers of Women’s College, Prof Qazi Jamshed, Prof Ehsanullah Fahad and Dr Muhammad Furqan, who passed away during the Corona pandemic.