‘Workers and Robots’: U of T researcher focuses on Amazon’s warehouses in new book

Amazon has been criticized for its data-driven approach to labour management, but a new book by the University of Toronto’s Alessandro Delfanti reveals just how far the online retail and web services giant is willing to go when harnessing technology to make its workers more efficient. 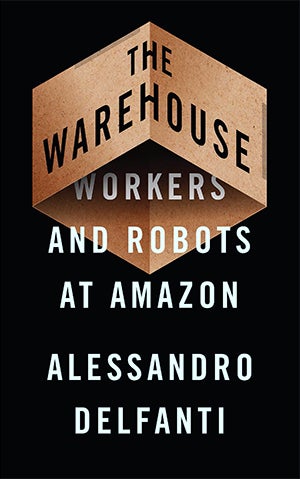 In The Warehouse: Workers and Robots at Amazon, Delfanti, an associate professor at U of T Mississauga, examines how Amazon uses computer algorithms, surveillance systems and managerial techniques some have described as dehumanizing at its approximately 200 warehouses, logistics and delivery facilities – including 46 in Canada – to operate its massive labour force.

“The way that Amazon is using technology to change labour processes to be more efficient and squeeze more labour out of workers is a continuation of the logic of the industrial revolution,” says Delfanti, a technology and labour researcher who is appointed to U of T Mississauga’s Institute of Communication, Culture, Information and Technology as well as the Faculty of Information.

“It’s not about using technology to help workers, but workers having to make themselves more efficient in relation with machines.”

The rise of Amazon intersects with Delfanti’s personal history. A 15-minute drive from his childhood home of Piacenza in northern Italy is the oldest and biggest Amazon warehouse in that country, built in 2011 and employing a few thousand people. Many of his friends and former classmates have worked at the giant facility, which is nicknamed “MXP5” and fills hundreds of thousands of orders per day.

“In Piacenza, Amazon became a heavy presence before the area was even an eligible destination for delivery. Boxes from MXP5 went out to the more modern and busier metropolis of Milan, while we got the jobs, the downward wages and working conditions, and the environmental degradation.”

The impact of Amazon on his hometown – including the successful unionization effort of its workers in 2017 – and the company’s dramatic rise to become one of the world’s biggest private employers inspired Delfanti to comprehensively investigate Amazon’s workforce practices and how they are changing the way we all work.

He also reviewed the company’s patents and discovered a potential plan to develop augmented reality goggles that supervisors could use to scan workers’ faces for data about their performance, including how fast they work and how many breaks they take.

While Amazon has grown exponentially throughout the pandemic, Delfanti says he is encouraged by the rise of worker resistance movements that are starting to lead to better working conditions and health and safety provisions at some Amazon workplaces.

However, he still sees a need to protect workers’ rights at Amazon and beyond.

“Big technology companies do what they can to be immune from regulation and taxation and become increasingly powerful,” Delfanti says. “When you look at the wealth of these companies, how much money and power and influence they have over society and politics, it is very concerning.”