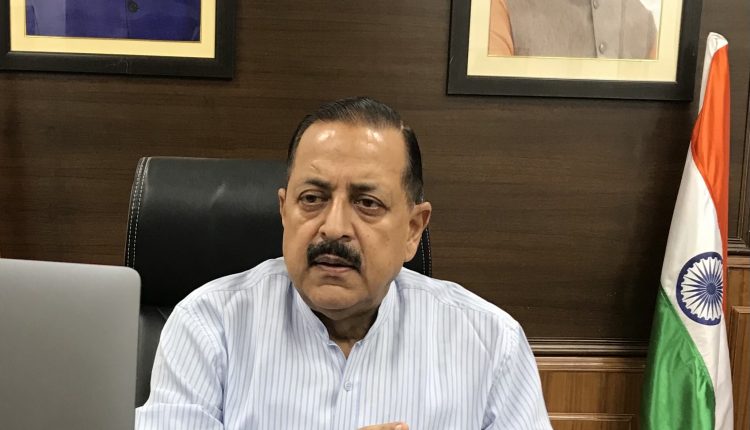 New Delhi: Working from quarantine, after being discharged from the hospital following COVID -19 infection, Union Minister Dr Jitendra Singh today reviewed On-line his UdhampurLok Sabha constituency’s COVID management status with the officers of the respective district administrations and public representatives.
The meeting was held through video conference, also because Singh is yet to test negative for COVID after the recent episode of infection and he is still not physically meeting or interacting with anybody.

The meeting covered each of the six main districts of the Lok Sabha constituency, namely Udhampur, Kathua, Reasi, Ramban, Doda and Kishtwar. Among those who participated in the meeting were the respective DDC Chairpersons, respective Deputy Commissioners, respective Municipal Chairpersons, Senior Superintendents of Police, Chief Medical Officers and Principals of the respective Government Medical Colleges. During the meeting, each of the districts was separately engaged in interaction, one by one.

During the meeting, Dr Jitendra Singh emphasised the point that the war against COVID has to be fought collectively and while the health and administrative management are imperative, the optimum results cannot be achieved without participation of community and participation of people’s representatives. He also stressed the need to address the issues of social concern with a human and sensitive approach.

For example, he said, even a single patient requiring an Oxygen bed but not getting it, will cause greater disenchantment and panic in the society compared to hundred other patients who have been cured, recovered and gone home.

Dr Jitendra Singh also suggested that each district should have multiple telephone helplines, which should be vibrant and always available to respond and guide the needy. He instructed all the Deputy Commissioners that once these helplines are in place, the same should be widely publicized among the public because otherwise many needy individuals, in confusion and panic, start posting their requirement for bed or oxygen or medicine on social media platforms, which may not always resolve their issue, but on the contrary tends to spread panic in general.

Dr Jitendra Singh said, he and his office staff are regularly in touch with all the district administration and public representatives on a day-to-day basis and whenever required, he can be accessed for intervention, even though he is currently in post-COVID isolation.

During the meeting, Dr Jitendra Singh was informed that, by and large, the COIVID management in all the six districts was fairly under control and at the social level also there was not much of grievance regarding this. He was informed that in each of the six districts, the mortality or death rate has been by and large around or less than 1%. The COVID positivity rate also in these districts has, by and large, remained around 2.5% to 3% except in Udhampur district which has possibly recorded a higher positivity rate. It was also informed during the meeting that while in Ramban, the Oxygen Plant will become operational soon, the Oxygen Plant in Doda is already complete and in Kishtwar it is nearing completion.

About the vaccination status, it was informed that in all these districts, the vaccination has so far been undertaken only for 45 and above, but it is progressing well. Ramban so far recorded vaccination of 80 to 90%, Kathua more than 60% and Kishtwar more than 50%. The ventilator position, by and large, in all these districts was fairly satisfactory, though in some cases, there was lack of trained manpower to carry out intubation.