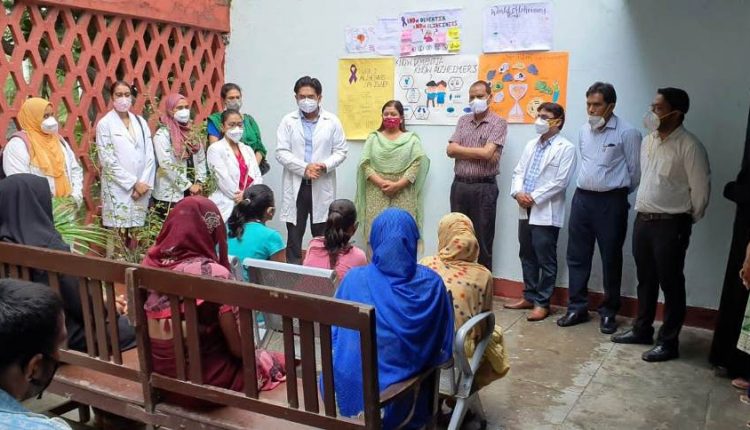 He was delivering an awareness speech at the Rural Health Care Centre (RHTC), Jawan during the World Alzheimer’s Day observations of the Department of Psychiatry.

Prof Azmi spoke on the causes and symptoms of Alzheimer’s and the risk factors attached to it.

This disease is frequent in older and senior individuals when progressive illness causes brain cells to deteriorate gradually, he added.

Speaking on the risk factors for Alzheimer’s disease, Dr Sharvan Kumar (Department of Psychiatry) said: “The probability of developing the disease can increase if someone has a parent or sibling affected with Alzheimer’s. Lifestyle, environmental factors and genetics also play a major part in this illness. One of the biggest risk factors for developing this disease is old age as people who are diagnosed with Alzheimer’s usually happen to be 65 years of age or above. People can also suffer Alzheimer’s after traumatic brain injuries”.

Dr Faisal Shan extended the vote of thanks

He deliberated that dementia and Alzheimer’s is increasing in low and middle income countries and that there are hurdles in the diagnosis of the disease.

Dr Shahi discussed technologies that help to diagnose Alzheimer’s and suggested measures such as brisk walking, healthy diet, engaging in activities of solving puzzles and developing new skills to prevent the disease.