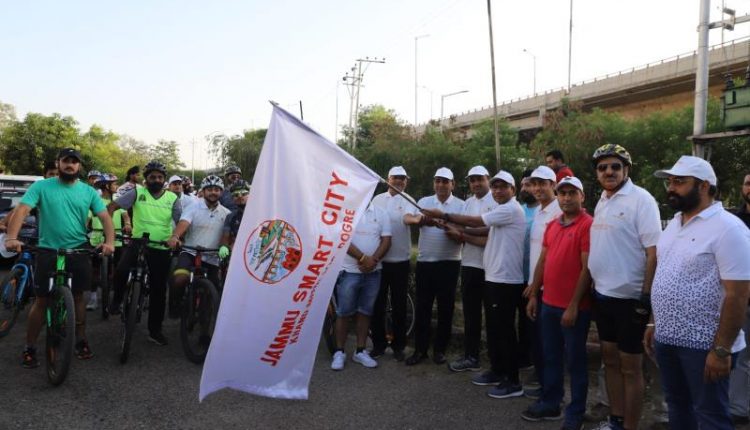 Scores of bicycle lovers, including men and women covered around 10 KM stretch from Kala Kendra-KC Chowk- Satwari and returned to the starting point.

The rally was part of the Union Government’s initiative to encourage people towards cycling and was organised in consultation with Smart City Mission, Ministry of Housing and Urban Affairs (MoHUA) and Ministry of Youth Affairs & Sports.

“Such events should be organised more frequently to encourage people to adopt a healthy lifestyle,” the JMC Mayor said. He added that this will help to achieve the goal of Swach Jammu, Swasth Jammu.

Divisional Commissioner, Ramesh Kumar said that cycling has immense benefits. “Cycling will not only promote a healthy lifestyle but also play a critical role in reducing pollution levels from the city,” he added.

Speaking on the occasion, Rahul Yadav explained to the participants about the immense benefits of cycling and highlighted how the pollution levels could be reduced if more and more people use cycles.

“The rally is an initiative to bring all cycle enthusiasts under one roof and educate them about the eco-friendly mode of transport,” he said.

“Anyone can use a cycle in the city as many docking stations, each with 10 bicycles, have been established at important locations. The users have to pay minimum charges for the usage,” he said.

“This has been an incredible experience. We are very happy to get such a warm response from people. There were people from all walks of life and it is good to see that people are aware of the immense benefit of cycling,” Hitesh Gupta said.

Later, Deputy Mayor Purnima Sharma distributed certificates among participants. She hailed the Jammu Smart City Limited for the initiative and asked people to pedal more frequently for a healthy lifestyle.

Massachusetts Institute of Technology: Making the case for “fake lawyering”

Massachusetts Institute of Technology: Cracking the case of Arctic sea…

Massachusetts Institute of Technology: Making the case for “fake…