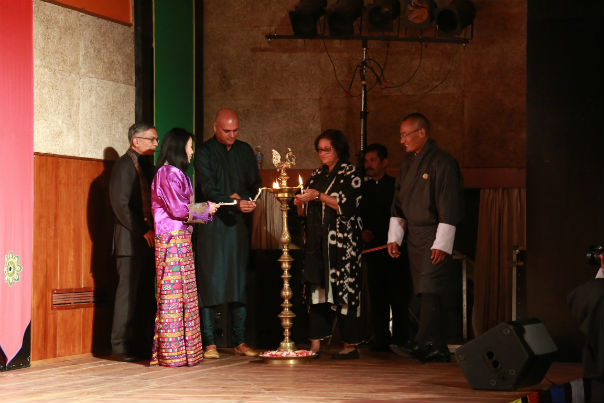 The 2017 edition of the festival will embrace and explore globally relevant issues such as Environmental conservation, Natural history, Spirituality & Buddhism, and the global evolution of textiles and design traditions, amongst others, thereby bringing together a range of expertise and perspectives throughout the three days.

Mita Kapur, Festival Producer and CEO, Siyahi, welcomed audiences to the Festival and said that as the world increasingly seeks solace in the wisdom of writers, the Mountain Echoes Literary Festival is a celebration of the power of ideas and the joy of imagination, with a touch of magic. She thanked Her Majesty the Royal Queen Mother Ashi Dorji Wangmo Wangchuck for her continued guidance and patronage and the Royal Government of Bhutan for their continued support.

Her Majesty the Royal Queen Mother Ashi Dorji Wangmo Wangchuck gave the opening address of the evening and said that India and Bhutan’s shared love of literature and arts brings the two countries together year after year. She also spoke about the positive impact the festival has on young Bhutanese minds and the increasing interest in literature and arts in Bhutan.

In his address, His Excellency Ambassador Jaideep Sarkar emphasized that both neighbours, Bhutan and India, have a lot to learn from each other and the Festival provides the perfect platform for audiences across the globe to experience the magic and mystique of Bhutan.

The highlight of the evening was a performance by His Excellency Lyonchhen Tshering Tobgay who recited a poem, along with a bright young 16-year-old student from Bhutan High School Dorji Gyeltsen. The poem, written by Charmi Chheda, revolved around the difference in the thought processes and opinions of the two generations, and how each takes a step forward to bridge the gap, uniting for a better tomorrow, and ends with “As we stand here, the voice is one, the thoughts are one but no one is old, and no one is young. Here we create a present, and call it a gift. This is that will be, the song that I sing, the anthem of the yellow and orange. As it flutters in the air, hear it now closely. Isn’t this but the mountain echoes? This is not an illusion, this is reality. This is not an illusion, this is reality.”

Festival Co-Director Tshering Tashi then regaled audiences with tales of Bhutan and India’s decades-long relationship dating back to 1955, highlighting anecdotes about Pandit Jawaharlal Nehru, ‘the architect of Bhutan and India’s friendship’. He also said that the intimate festival is different from others around the world as it allows audiences to interact with speakers without any barriers, in a way which allows a free and two-way exchange of thoughts and ideas.

He also spoke about the increasing number of Bhutanese and international participants at each edition. The 2017 edition of the Festival will see 75 writers from across the world come together for debates, discussions and exchange of ideas. This includes 53 writers from Bhutan, 21 from India and 11 from other countries, including United States of America, Australia, United Kingdom, Czechoslovakia, Bangladesh and Nepal.

The evening concluded with a short address by Festival Co-Director Namita Gokhale where she said that the magical festival is full of joy, laughter, discussion and debates and that she is excited for the eighth edition to unfold over the next three days.

Presented by the Jaypee Group and powered by the Department of Tourism, Government of Rajasthan, the Mountain Echoes Literary Festival is an initiative of the India-Bhutan Foundation and India’s leading literary consultancy, Siyahi.

The three-day festival commences tomorrow and the stellar line-up of speakers includes names from Bhutan, India and around the world. Headline speakers at this year’s edition include Australian author Markus Zusak, acclaimed for his international best-sellers such as The Book Thief; Francesca Beard, a London-based writer and performance poet; beloved children’s author Ruskin Bond; American television host and author Padma Lakshmi and Indian author Ashwin Sanghi.

For years, Mountain Echoes Literary Festival has set the pace for discussions on ancient cultures and contemporary issues. The three-day festival will continue till August 27, with engaging and insightful discussions being held across six locations in the city.