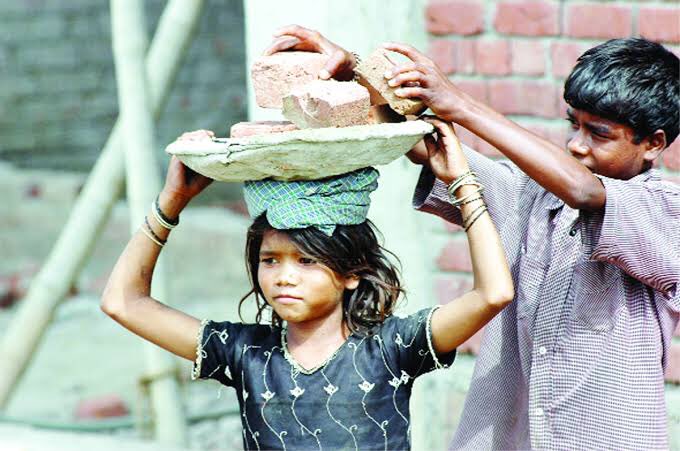 “The only way to reform Children is to win them over with love. So long as a Child is unfriendly, you can’t mend his ways”- Pandit Jawaharlal Neheru

Children being the future of our world need utmost care and protection during nurturing. But, day by day there is a growing concern   about the number of children who have given hammer instead of pencil, given small kids in their lap instead of toys to play, have given bag full with groceries to carry instead of a bag full with books to carry to school.  There are children those are neither getting opportunity to read, go to school, play, have fun rather are engaged in various workforce so that they can survive. They are engaged in multifarious work that are harmful to their health development, physical growth, mental growth  as well as  impacted their education. Most of the children asked to leave education in certain period of time to support parents in labour.

During this   COVID 19   times there is possibility of increase in child labour. As  there are many people those were migrated from the state to outside states or within the state from one  district to another have   quit their job permanently and back to home and  as well as people have spend their savings to survive during this crucial time.  Virus-induced restrictions  cloud lead to disruptions in the income source, which would cause economic distress among the poor families.   Some of the adults lost life infected by COVID.  Lack of adequate food, lack of financial support to survive, lack of opportunity to revive  family economic condition shall  force children to engage in labour.

Children constitute principle assets of any country.  Children’s Development is as important as the development of material resources and the best way to develop national human resources is to take care of children.

UNCRC  articles 24 says, The Government should protect children from work that is dangerous, or that might harm their health or their education. Constitution of India says No child below the age of fourteen years shall be employed to work in any factory or mine or engaged in any other hazardous employment.

So   today on June 12, which is marked as World Day Against Child Labour, let’s bring attention to the problem of Child labour and find ways to  fight against it.   Children are being pushed into forced labour,  lets join hands together ( People from different walks of life) to raise awareness across the State  about the problem  of Child labour  and develop strategies  and actions to help them.

Achieving the SDGs in extraordinary times

High Skilled Migration during and post Covid 19:Perspectives from Latin America and Asia