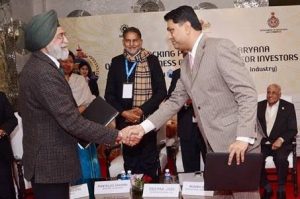 Gurugram: World Education Foundation, UK (www.wefuk.org ) and the Government of Haryana (http://www.haryana.gov.in/) signed a historic MoU to enhance school-quality and learning-outcomes across the state. The memorandum was signed at the Pravasi Haryana Divas held at Gurugram, in the presence of the HRD Minister, Mr. Ram Bilas Sharma.

Haryana Minister for Education, Mr. Ram Bilas Sharma said, “While other countries export dairy, automotives and machinery, India’s key export are its people and talent. I welcome NRIs and international organisations to participate in Haryana’s future.”

Mr. Anuraag Saxena, CEO, Asia-Pacific, based in Singapore, said, “We are excited to be working with the Haryana, one of the most progressive states in the country. Schools should have the ability to showcase their strengths to parents, boards and the larger society. The international seal-of-trust and global best-practices from WEF, will allow the state to build improvement programs for schools.”

Mr. Saxena was also felicitated at the event.

Mr. Saxena adds, “WEF’s Star-Rating for schools brings in the much needed transparency and clarity around a school’s quality. Private-Schools in India and the Middle-East have achieved the International Star-Rating. They have been able to communicate better with parents; as well as create improvement plans more effectively.”

WEF welcomed the recent moves made by the Government of Haryana, to connect educational programs to larger national programs like Swacch Bharat and Digital India; and urged schools to proactively inculcate “a holistic nation building character” among students.