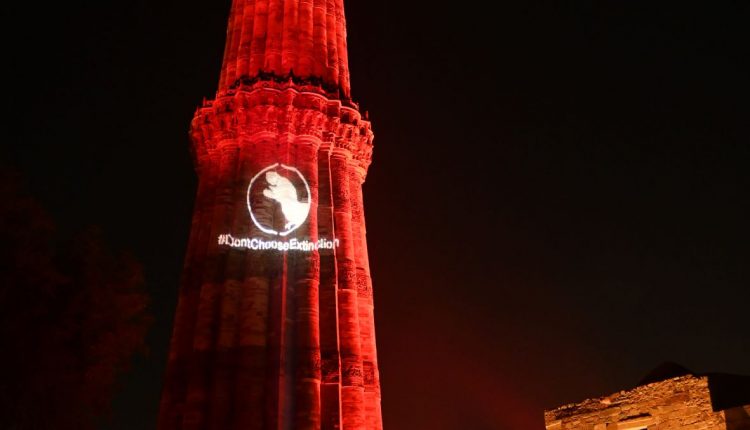 New Delhi: Delhiites were in for a surprise this weekend. An unusual and rare visitor made an appearance at the famous heritage sites of India –Qutub Minar and Safdarjung Tomb.

‘Frankie’ the Dino took over the heritage sites with a message we have only One Earth – Don’t Choose Extinction. The messaging is a stark reminder that while the dinosaurs went extinct due to an asteroid, we humans are driving ourselves extinct through climate change.

Frankie the Dino is the mascot of the United Nations Development Programme’s‘Don’t Choose Extinction’ – a global campaign to urge humanity to accelerate Climate Action. This World Environment Day, UNDP India has brought the campaign to India.

“Climate change disrupts economies and affects people, communities, and countries dearly today and even more tomorrow. By bringing Frankie to India, we want to remind people that the time for climate action is now! We all have a role to play in protecting planet Earth,” said Ms. Shoko Noda, Resident Representative, India.

The latest IPCC report highlights that managing climate change will require swift action. It acknowledges that human activity is driving climate change, affecting the oceans, atmosphere, ice, and biosphere in ways that are “widespread and rapid.”It notes that emissions of greenhouse gases from human activities are responsible for approximately 1.1°C of warming from 1850 to 1900.

“Frankie has travelled through time to remind us that climate change will have devastating impacts on our lives if we don’t act now. But while Frankie and his friends did not have a choice, we do. How we live, consume, and waste affects the future of our planet. Each of us can be a climate champion and inspire change. Let’s not choose extinction!” said Shombi Sharp,  UN Resident Coordinator in India.

In the film, ‘Frankie’ the Dino bursts into the iconic UN General Assembly Hall, famous for historical speeches by iconic global leaders. Addressing a shocked and bewildered audience of diplomats and dignitaries, Frankie says that “it’s time humans stopped making excuses and started making changes” to address the climate crisis.

“At least we had an asteroid,” the dinosaur warns, referring to the popular theory explaining the species’ extinction 70 million years ago. “What’s your excuse?”