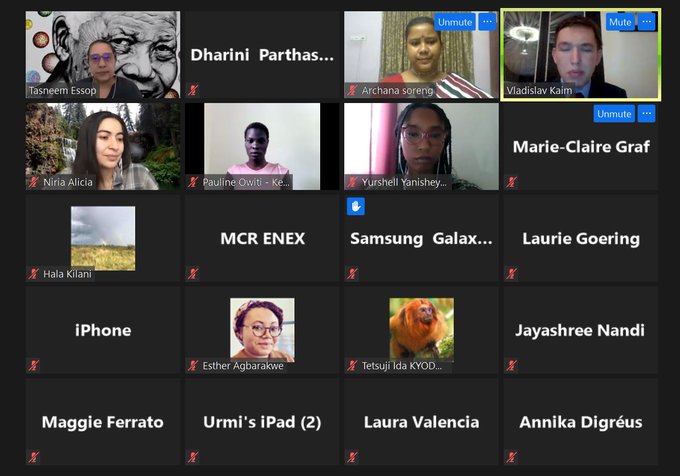 New Delhi: Young people around the world have been instrumental in mobilising for climate action and leading public demand for a transformational response from governments to the climate and ecological crises. Speakers at a youth-focused press briefing hosted today by Climate Action Network reminded world leaders that distant plans to cut emissions and a failure to address the immediate needs of the most vulnerable people do not line up with the escalating scale of the climate emergency which is harming their communities and destroying their future.
Youth representatives from India, Moldova, Kenya, Colombia, and the USA emphasised that young people have consistently stayed focused and organised for stronger climate action even through a global pandemic. They demanded that governments engage with youth groups beyond mere token participation and offer them a seat at decision-making bodies and use their skills and solutions to fight the climate crisis and to limit dangerous global warming to 1.5 degree Celsius.

Quotes from the speakers [link to recording available on request]

“The simultaneous advent of COVID19, climate and economic crises is so devastatingly overwhelming for the youth that it requires nothing less than integrated, whole-of-society solutions. And we have them.”
-Vladislav Kaim (Moldova), the UN Secretary-General’s Youth Advisory Group on Climate Change (kaim.vladislav@gmail.com)

“Sustained climate action cannot be achieved unless the worldviews and knowledge systems of Indigenous Peoples and local communities are respected and communities are empowered.
Investments in green jobs is high on the youth agenda and we demand that these should not be marred by ‘green washing.’
-Archana Soreng (India), the UN Secretary-General’s Youth Advisory Group on Climate Change (archanasoreng@gmail.com)

“I believe young people are a major human resource for development, and key agents for change. Therefore, involvement of young people in decision making should be a key priority area. As young people we have the power to solve the challenges we face in the world, but we are often side-lined. With Mock COP26, I had the opportunity to contribute to something meaningful to society and change the perception of youth leadership,”
-Pauline Owiti (Kenya), Mock COP26, (PaulineOwiti@protonmail.ch)

“Countries around the world must respect and honor indigenous rights. In the face of climate change, ecological collapse and pandemics, traditional ecological knowledge is key to building a resilient future that can withstand and thrive as climate change continues to unravel.”
-Niria Alicia Garcia (USA), UNEP Young Champions of the Earth (niria.garcia@gmail.com)

“This is an opportunity to build collective resilience as inhabitants of this planet”. As the youth of today we must be part of the discussion of the climate crisis and take charge of the health of our planet and make the leaders accountable for their inaction. Youth of Latin America and the Caribbean are key in the discussion of climate action and in the building of a better future.
The future for the inhabitants of my island is uncertain. We will only remember it by photos and the old tales, of its wonderful beaches, sunsets and its marine biodiversity. They will speak of us as one of many cultures in the middle of the sea that will be soon extinguished.”
– Yurshell Rodriguez, Providencia Island, Colombia, Climate Action Network Latin America