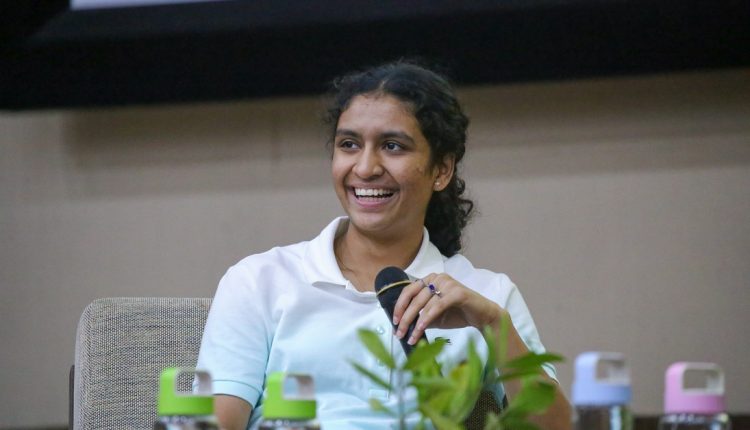 Gandhinagar: The inspiration quotient at the Indian Institute of Technology Gandhinagar (IITGN) touched a new height on Monday as Ms Tasnim Mir, World no 1 girls junior badminton player, interacted with the IITGN community and shared her journey from a small town in Gujarat to the global sporting stage. The special interactive event ‘A Day with a Champion’ was organised by the sports council of IITGN.

The event began with a tour of the newly constructed sports complex of IITGN followed by a lively Q&A session with Ms Tasnim Mir, wherein she shared her journey, experiences, and challenges that led her to attain the coveted rank. Ms Tasnim, who hails from Mehsana, Gujarat, created history after becoming the first Indian to claim World No 1 ranking in the under- 19 girls’ singles badminton category as declared by the Badminton World Federation in January 2022. She started playing badminton at the age of seven under the guidance of her father, Mr Irfan Mir, who is a badminton coach. So far, Ms Tasnim Mir has won eight international titles, 22 national titles, and 40 state titles. She is also the only female player who has won the Asian Junior Championship twice.

Giving some tips to the players at IITGN, Ms Tasnim said, “Apart from all the strategies and practise; ultimately, the game examines your mental strength. If you are not strong mentally, you cannot play a single stroke the way you want to play. Failures are part of the game. Just focus on giving your best and work on the weak aspects to improve yourself after a failure.” She also recalled her experiences of meeting and practising with Indian badminton legends Saina Nehwal and P V Sindhu.

While talking about the sacrifices one has to make to succeed as a sportsperson, Tasnim shared that although she loves chocolates and sweets, she had to give them up because the diet discipline for the game demands it. She also does not have a phone and does not use social media as opposed to most of the young generation. She likes to do painting and drawing in her free time.

In her concluding advice for the young players aspiring to make a career in sports, Ms Tasnim said, “Whichever sport and category you choose to play and make a career in, hard work is the key. Do not give up on your dream. Choose a goal and completely focus on it; give it your 100%, and you will be able to perform well in anything you want to do in life.” The titleholder also signed one of her t-shirts, which will be kept at the IITGN sports complex as a memorabilia.

Later in the evening, Ms Tasnim also played an exhibition match with one of the winners of the intra-college Badminton Super League-2022 at the newly built sports complex of the Institute. Sharing his experience of playing with the champion, Gaurav Kumar Rawat, a first-year BTech student at IITGN, said, “It was a once-in-a-lifetime moment for me to play a game with the current U-19 girls’ singles world champion. I was very excited and nervous at the same time. I would like to thank IITGN for the golden opportunity.”

The entire event received an enthusiastic response from the IITGN students and community as they could interact and click selfies with her, and watch the World no 1 live in action.