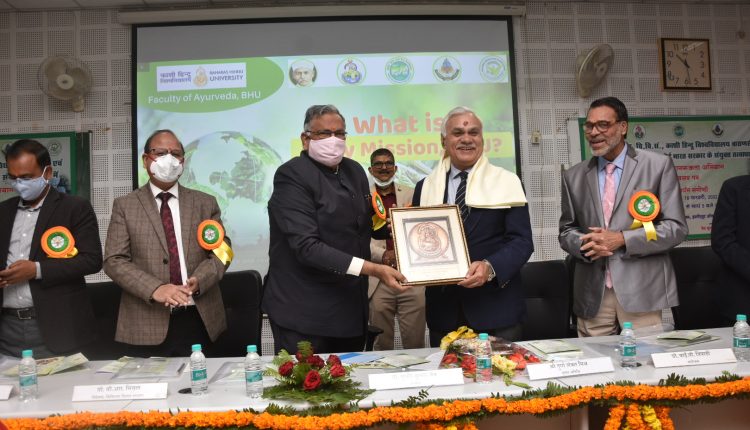 WORLD TODAY ACKNOWLEDGES AYURVEDA, BUT WE NEED TO DO MORE: UP CHIEF SECY

VARANASI : Vice Chancellor Prof. Sudhir K. Jain has said there is a greater need of integrating technology in research in Ayurveda in order to take it to a larger public and make it even more commercially viable. Prof. Jain was addressing the inaugural ceremony of three day Seminar and Workshop on Giloy Mission organized by Faculty of Ayurveda, Institute of Medical Sciences, BHU & National Medicinal Plant Board, government of India. The program will also train farmers and various stakeholders. Prof. Jain said that if the Uttar Pradesh Government and Banaras Hindu University join hands and work together for the promotion of Ayurveda, it will bring remarkable results. He said that BHU is uniquely placed when it comes to medical education as it offers education and treatment in traditional as well as modern medicine systems. What BHU researchers in modern medicine and Ayurveda can publish no one else anywhere can do, as they do not have the advantage of having both the disciplines of medicine at one place, as we in BHU do.

Chief Guest of the program, Chief Secretary, Uttar Pradesh, Durga Shankar Mishra said that all of us have seen how Ayurveda proved its worth during the Covid19 pandemic. Not just that the world is now aware of the ancient Indian medical system and acknowledges it. We were the one who took time in acknowledging our own strengths and might. But now that we know what we are capable of, we must do what all we can do to make sure that Ayurveda is developed and popularized and reaches each and every household. He said that Giloy Mission is just a beginning, there is a lot that is still needs to be done.

iednewsdesk May 21, 2022
The stories of female Newcastle United fans from the 1950s have been revealed as part of a new research project…