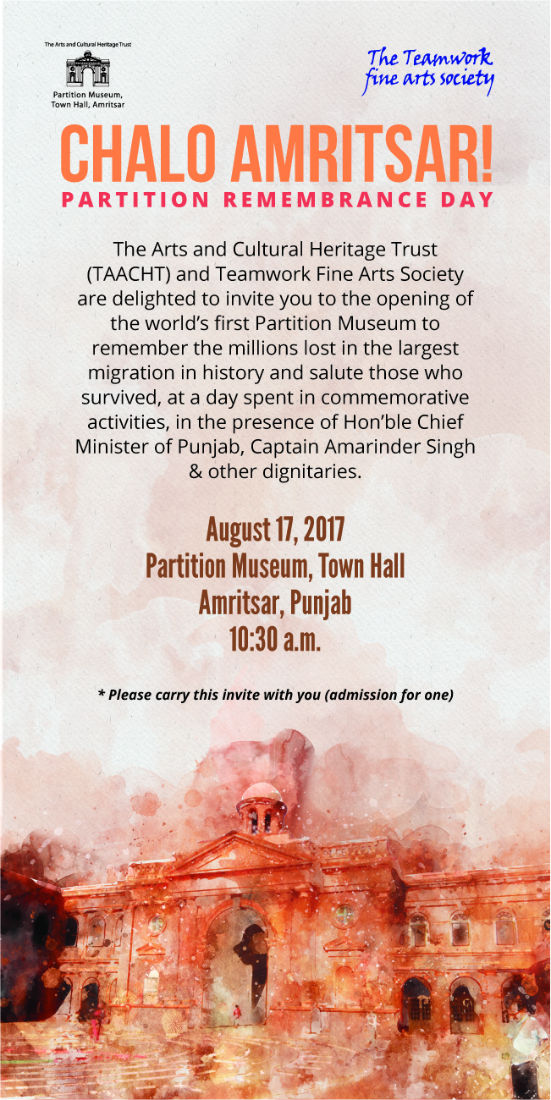 New Delhi: The story of India’s freedom is as much one of heartwarming joy as of tremendous hardship, sacrifice and tragedy, scarred by the trauma of loss and heartache. While India awoke to a fresh dawn of hope on August 15, 1947, millions on the eastern and western reaches of the newly-formed country were facing the relentless horrors of bloodshed, violence and separation from loved ones.

Seventy years after India won Independence from the British, the country will remember the sacrifices of these millions, displaced from their homes and forced to uproot themselves, leaving behind the familiarity of their circumstances in the Partition of 1947.

Housed at the historic Town Hall in the fascinating city of Amritsar, the Partition Museum will open its doors to the public on August 17, 2017, to mark one of the most cataclysmic occasions in the history of modern India which shaped its collective consciousness, to honour those who died in the brutality and pay tribute to the indomitable will of the survivors. The Museum, a first-of-its-kind in the world, will observe the first ‘Partition Remembrance Day’, with support from the government of Punjab, which has officially marked August 17 on its calendar. The museum’s trustees have painstakingly collected and curated the exhibits and memorabilia that will be displayed at the galleries. The Hon’ble Chief Minister of Punjab, Captain Amarinder Singh, will inaugurate the Museum and a commemoration ceremony will take place to mark the occasion.
August 17, 1947 was that fateful day on which the details of Radcliffe Award were announced. Named after Sir Cyril Radcliffe, the ‘man who divided India’, the Award laid down the geographical lines along which India would be divided. The unspeakable violence this random and careless mapping, causing the largest exodus in modern history, unleashed, is indelibly etched in our nation’s memory.

The Museum hopes to stand as a monument to the sacrifices of so many people and remind the country of those who went through unimaginable suffering even before the newborn nation had taken its first steps. “We will remember the spirit, courage and resilience of those millions of refugees who were uprooted overnight, and yet dedicated themselves to rebuild the newly-independent India,” said Kishwar Desai, well-known author and the Museum’s Chief Trustee.

The idea of the Museum “arose from a sense of urgency”, admit the people behind the project. In 2015, Desai, Dipali Khanna, Bindu Manchanda, and Mallika Ahluwalia, the Museum’s chief executive, came together to form The Arts and Cultural Heritage Trust (TAACHT) and set up the Partition Museum. They also have a Group of Patrons, led by Kuldip Nayar, Lord Meghnad Desai and Prasoon Joshi, with others like Soni Razdan, Pinky Anand, Sunaina Anand, Ritu Kumar, Vikram Sahney, and Bela Sethi, as trustees. They decided to have a series of events across Delhi, Amritsar and London, to raise awareness and received overwhelming response in favour of setting up the Museum.

Although it took around a year to zero in on a suitable site for the Museum, with the keen enthusiasm displayed both by the Government and the people of Punjab, the Trust was able to launch the first phase of the Partition Museum by October 2016, at the Town Hall itself. The Museum had dignitaries such as Union Finance Minister Arun Jaitley, Gulzar and Mahesh Bhatt drop in, and the general footfall stood at more than 40,000 over a period of five months.

Set up entirely through private donations of memories and memorabilia, the Museum is supported by funds from both individuals and corporate houses. TAACHT has also formed an important partnership with the Teamwork Fine Arts Society, which has been commissioned to help set up the Museum. The Teamwork Fine Arts Society, a part of Teamwork Arts, is deeply committed to the social responsibility within art and culture.

Sanjoy K. Roy, Managing Director, Teamwork Arts said, “The Society’s expertise lies in producing international performing and visual arts festivals, feature and documentary films, social communication, curation and consultation on exhibitions, promoting oral traditions, besides identifying and nurturing young talents in all areas of the fine arts. The Museum is critical to our perspective on the corpus of art and literature which have risen from the ashes of the Partition. We are proud to be involved with the project.”

Both Desai and Roy said that while the museum’s purpose is to be the custodian of memories and remember the millions who suffered, particular focus will be on individuals and families who, despite losing almost everything, showed courage and resilience. Even at the cost of foregoing their own sufferings, they dedicated themselves in rebuilding the lives of their loved ones and in the process, rebuilding the new India. The Museum, which is developing into a pivotal repository of India’s history, will use memorabilia, personal effects, letters and rare testimonies from survivors to weave a story and create an immersive experience, which not just talks of anguish and loss but also of hope.