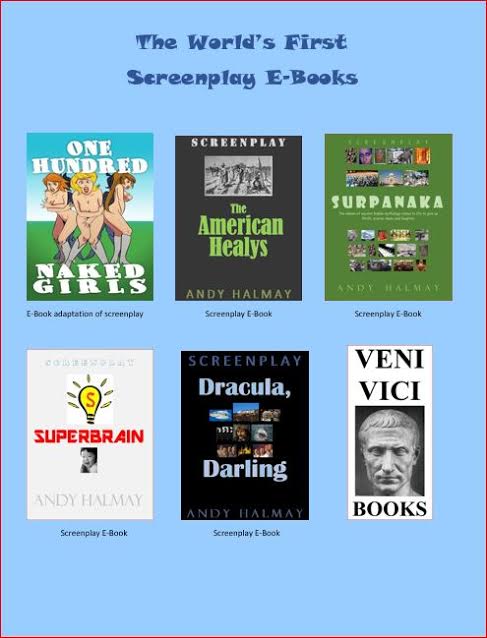 New Delhi: Veni Vici Books, division of Toronto-based Veni Vici Entertainment Inc., is getting buzz by publishing the world’s first screenplay e-books, adding a window to the traditional sequence of content windows which consisted of the book, the screenplay adaptation, and the film, followed by DVDs, TV, etc.

Screenplays of produced films have been available in limited distribution for study purposes but no one has previously made available to the public screenplays of films to be produced in the future.

Veni Vici’s chief, Andy Halmay, a former New York advertising executive, states, “Films, particularly indies, can never get enough pre-production publicity and when dealing with an original screenplay it makes sense to either do a book adaptation to precede the film or just make the screenplay available to the public.”

He feels that the potential feedback from readers of these screenplays in e-book format would carry more validity than costly consumer research that major studios often do.

Veni Vici Books has published a book adaptation from the original screenplay, “100 Naked Girls,” which has been selling steadily on Amazon and Kobo. The film “100 Naked Girls” is now in development.

In the past few weeks, Veni Vici has released four screenplay e-books on Amazon in 12 countries: “The American Healys,” “Dracula, Darling,” “Surpanaka,” and “Superbrain.”

“Dracula, Darling,” a Billy Wilder type comedy, is getting casting suggestions from e-book readers which, Halmay says, is a very encouraging sign.

“I love the suggestions and will follow up on them,” he said. “Jackie Chan as Meyer Ming, the publicist, is an ideal suggestion, and Jon Lovitz in the lead, as John Constant, the hapless producer who rejected the book, Jaws, which Spielberg subsequently turned into an unprecedented hit, really hits the nail on the head.”

Halmay adds, “A casting director would have charged for these suggestions – screenplay e-books may turn out to be more helpful than we ever expected.”