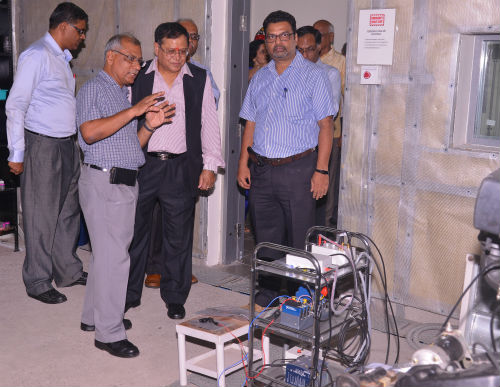 Further, he said that specific programs Iike Coal Gasification, Alternative energies and others would also be set up. The Twin Centres located at IIT Madras & IISc would complement each other well.

Dr. Saraswat said that the NCCRD has been set up as a Nodal Centre in the region. Any institute and industry can work with NCCRD as it is totally IT-enabled, possesses a strong simulation facility.

The establishment of the Centre will impart a major boost to the Indian Scientific Community and will provide an impetus to research in Alternative Energy and Environmental Protection by focusing on effective utilization of combustion as a means of thermo-chemical energy conversion. The Centre is supported by Science and Engineering Research Board, Department of Science and Technology (DST), Government of India.

Elaborating on the importance of this Combustion Research Centre, Prof. Ashutosh Sharma said, “Combustion is an extraordinary science with length and time scales varying from large and small. This field has the potential to be hugely translational.”

This research has applications in many industries, ranging from automotive to thermal power, coal combustion, aerospace propulsion and so on.

“We’re proud of this facility. It has the strongest group of experts working on Combustion and will create a Strong Foundation in this important area. This has to be sustained, for which the Centre should work together with large stakeholders to diffuse the benefits to many areas,” added Prof. Ashutosh Sharma.

Speaking on occasion, Prof. Bhaskar Ramamurthi remarked, “Energy, Emission of Carbon Dioxide and pollutant gases have become very important due to climate change, global warming and other impact that combustion has. This Centre will play a pivotal role in making sure that India has access to the latest technologies in all these areas.”

Further, he said, “We’re very excited to have this Centre at IIT Madras because it gives us opportunity for students and faculty from various Departments to work together to solve the challenges that the nation faces.”

The inauguration was followed by a panel discussion on ‘Industrial Utilization of Combustion R&D’, which was participated by eminent members from the academia and industry, working in the field.

The NCCRD has been established at a total cost of Rs. 90 crore. It will develop state-of-the-art capabilities in combustion research involving experts in the country. The research interests are in 3 major application sectors: Automotive, Thermal Power, and Aerospace Propulsion, besides fire research and microgravity combustion to minor extent.

MDIS introduces a range of new Business and Management courses