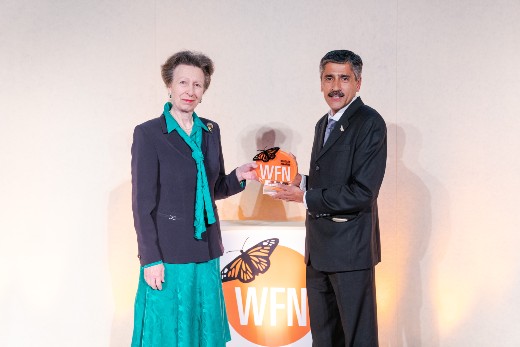 Charudutt Mishra has won the Whitley Gold Award from UK wildlife conservation charity, Whitley Fund for Nature (WFN), presented by Patron, HRH The Princess Royal  at a ceremony held in London on 27 April 2022. As the world’s leading snow leopard conservationist, Mishra has spearheaded a recovery in their population across the high mountain ecosystems of Asia.

Mishra established India’s first community-based initiatives to save the endangered snow leopard. These include innovative livestock insurance programmes to boost income and discourage retaliatory killings, and locally-managed wildlife reserves on community land. Winning his original Whitley Award in 2005, and several follow-on grants from WFN since, his team currently work directly with local people across nearly 60,000 sq. miles in some of the world’s most extreme environments. An estimated 6,500 wild snow leopards remain, prowling the high mountains and plateaus of twelve countries including India, Pakistan, Afghanistan, China, Russia, and Mongolia.

Edward Whitley OBE, Founding Trustee of Whitley Fund for Nature, said: “Charu epitomises the grassroots approach that WFN exists to support. His revolutionary, lifelong dedication to working with local people has reshaped the conservation landscape to the benefit of all, including those communities of the high Himalayas and their majestic snow leopards. Having worked with Charu since he received his initial Whitley Award 17 years ago, I have also seen his efforts to support other conservation leaders internationally, not least across all 12 countries in the snow leopard’s range. I am delighted that the Whitley Gold Award – our top prize – will give him the opportunity to expand this work by helping hundreds more wildlife conservationists, on every continent, to prioritise an equitable future.”

The Whitley Awards are held annually by the Whitley Fund for Nature (WFN) to recognise and celebrate effective grassroots conservation leaders across the Global South. The award is often referred to as the “Green Oscars”. The Whiteley Gold Award, which Dr. Mishra received, is awarded to a previous Whitley Award winner in recognition of their outstanding contribution to conservation. Dr. Mishra first received the Whitley Award in 2005 for his work on snow leopard conservation in Spiti, Himachal Pradesh.

“This work addresses one significant gap in conservation worldwide – our ability to work effectively with local communities, who represent one of the most important stakeholders in conservation efforts. I believe that what we do in conservation matters, but how we do it matters even more.” —Charudutt Mishra

Working across the species’ range of 12 countries of the snow leopard, the key to his success has been embedding conservation within local communities. His pioneering approach has been recognised as an outstanding global practice by the UN Biodiversity Conference. With ‘fortress conservation’ having displaced an estimated 130 million people worldwide, community-based conservation that champions the co-existence of people and wildlife offers a transformative solution to the biodiversity crisis. The Whitley Gold Award will enable Dr. Mishra to train conservationists on every continent in this equitable approach.

With the Whitley Gold Award, Mishra and his team will train conservationists on every continent in their local landscape. In addition to working with 250 frontline conservationists, they will empower 20 conservation leaders as future advocates, establish a collaborative problem solving hotline and enhance government buy-in for this equitable approach.

“When I first visited the village of Kibber 25 years ago I learnt of a snow leopard that had been brutally killed, with men and women lining up to beat the carcass and curse the dead cat for killing their livestock. Recently, in the same village, when an old snow leopard died after taking a fall while hunting, local people helped retrieve the carcass, offered it the auspicious Buddhist scarf, helped cremate it, and prayed for the departed soul. Such can be the transformative power of respectful community-based conservation.” —Charudutt Mishra

AstraZeneca expands its ‘Young Health Program’ in Delhi; opens 3 Health Information Centres in the communities of Sangam Vihar and Dakshinpuri

University of São Paulo: USP working group will contribute to the…

University of São Paulo: The secrets of geology in cooking, tourism…

University of São Paulo: Breaking patents on medicines represents an…