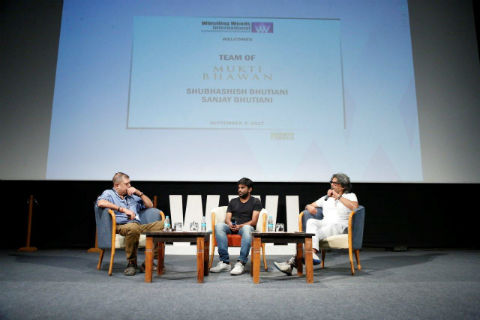 Mumbai,September 8th, 2017: Mukti Bhawan is not a film about achieving salvation, it’s about the celebration of death! The narrative was emphasized upon at the masterclass held at Whistling Woods International (WWI). The unique and rather dark subject death ,has been brought to light in a relatively unusual way. How people who are certain about their readiness to embark upon the journey to the other side, choose to attain moksha by going into seclusion for 15 days, is what the movie depicts.

The acclaimed father son duo, the young and energetic Shubhashish Bhutiani and the ace Ad-man Sanjay Bhutiani, shared the thought process behind the making of this film. The discussion varied on different aspects of filmmaking like the unconventional subject of the film, unorthodox way of presentation, uniquely different cinematography and numerous innovative ideas.

How were the Bhutianis different in the making of the film? They did succeed in breaking quite a few archetypes associated with filmmaking. Shubhashish elaborated on the necessity of the script being ‘fluidic’, as it underwent modification, thereby, adhering to the need of the hour. Emphasis on real time research that Shubhashish undertook, that is, referring to Facebook accounts of people for the characters of the film viz-a-viz the challenges of execution in the outdoors by the young crew was also discussed.

Speaking about the occasion, Shubhashish Bhutiani, Writer and Director, Mukti Bhawan said, “I’m really excited and happy after interacting with the students of my age group who have seen my film. I used to be a film school student and the opportunity that WWI is providing through the masterclass is very crucial for film education. WWI is catering to the need of the hour as it’s very important for the students to know the process, difficulties, challenges and achievements of filmmaking.” Further reinstating the reason for making a film on a rare topic, Shubhashish said, “This movie is about people who get so busy in their daily life, that they lose touch with their loved ones and the people around them.”

For the students of Whistling Woods International, this session on the film, which has won both national and international accolades, was a truly a one of a kind experience