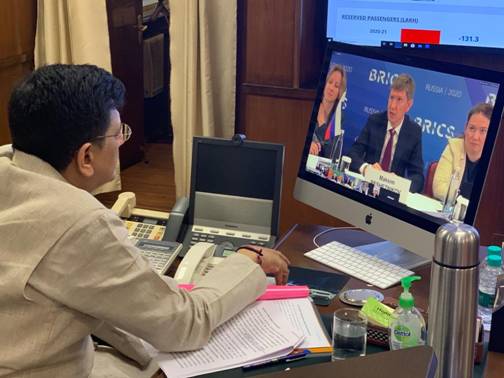 WTO reform process should be inclusive, balanced and consensus based: Piyush Goyal

New Delhi: The Commerce and Industry Minister Shri Piyush Goyal has called for all nations to enhance transparency in their trade and build trust to prevent losing their role as a preeminent trade partner. Addressing the 10th BRICS Trade Ministers virtual Meeting today, he said that for trade to play its part in the recovery process, all the partners must be trustworthy and transparent. “It is trust and transparency which determines the sustainability of global supply chains and nations must demonstrate their compliance with global rules of trade to remain a part of global trade flow. Increasingly, nations which trust each other are coming together to build global supply chains with corresponding investments in manufacturing and services,” he said.

The Minister said that the ongoing crisis has exposed the world to vulnerabilities, forcing us to explore ways to support each other. He said that Trade can be an engine of reviving growth in such a scenario and this is premised on strengthening of the WTO based on its principles of openness, fairness, transparency, inclusivity, and non-discrimination.

The Minister called for removing multiple hurdles in access to medicines at affordable prices created by the lopsided WTO rules for protecting intellectual property. He mentioned that the TRIPS Agreement did not envisage a pandemic where demand for vaccines and medicines would come from several countries simultaneously, with the requirement changing at a rapid pace. He said that IPRs should not block access to critical medicines and other devices required for the treatment of the disease.

Shri Goyal said that the pandemic has quite paradoxically provided us with a window of opportunity – to strengthen ourselves by building capacities, expanding manufacturing as well as plugging into the global value chains. The Minister said that as BRICS members are among the most affected countries in the world, we must collectively demonstrate a determined will to emerge stronger, while being prepared to face any such unknown crisis.

Shri Goyal said that the multilateral rules-based trading system is facing serious and grave challenges, including a spate of unilateral measures and countermeasures, deadlock in key areas of negotiations and an impasse in the Appellate Body. He said that for a large majority of WTO members, preserving its fundamental principles and objectives is crucial to ensuring the credibility of the multilateral trading system. He said that the WTO reform process should take into account these existing realities in the world and should, therefore, be inclusive, balanced and consensus based, leading to prosperity for all. He said “It is disheartening that we are seeing some proposals at the WTO seeking to ride on the pandemic for pursuing commercial ends. It will essentially support the quest of developed countries’ firms to have unhindered access to the markets in developing countries, while putting constraints on developing countries to establish domestic manufacturing capacities.”

Describing 2020 as a turning point in the history of multilateralism, especially for the BRICS grouping, the Minister said that any economic partnership must keep in mind the different size and population of each country, unequal levels of economic development and human development indicators, contrasting levels of prosperity, cultural diversity and significantly different political and judicial systems. He said that we place humanity at the centre of our global engagement and thus despite being hit hard by the virus ourselves, we have not shied away from providing humanitarian relief to those who sought it. India provided critical medical supplies to around 150 countries in these troubled times. As the ‘Pharmacy of the World’ we have catered to the spike in demand for drugs such as Hydroxychloroquine and Paracetamol being used for the treatment of Covid-19.

Talking about India’s proactive role in assessing and dealing with the challenges caused by the pandemic, he said that saving lives has been India’s highest priority. “Despite being home to nearly 17% of the world population, we have only 8% of COVID-19 affected patients worldwide. Under the leadership of Hon’ble Prime minister Narendra Modi, we implemented one of the severest lockdowns at an early stage thereby breaking the Corona Virus transmission chain and prepared the country to become self-reliant in Covid Care facility. We have done significantly better than many other countries, with a lower death rate and higher recovery rate.” As a response to the pandemic, India has significantly enhanced its capacities in the healthcare sector with the development of healthcare facilities, emergency rooms, provision of protective equipment and medical supplies, and training of healthcare professionals. Our people are also sensitised to maintain social distancing and wear face masks in public at all times.

About the steps taken to mitigate the economic challenges posed by the pandemic and bring economy back on track, Shri Goyal said that Prime Minister announced a stimulus package of over $300 billion, called Aatma Nirbhar Bharat, which is defined as a Self-Reliant India, which includes fiscal and monetary measures. He said that the edifice of this mission stands on five pillars of the economy: massive infrastructure building, technology, aspects of good governance, leveraging the demographic dividend, and promoting demand.

Calling upon BRICS to support responsible investment, Shri Goyal said that it should be aimed at balanced outcomes and create gains even for recipient countries and, most importantly, employment generation. The Minister said that amidst this turmoil, the BRICS nations must prepare, act and stand in solidarity with each other and seize the opportunities that come our way to build a strong, resilient, and reformed trading system that lays the foundation for our shared aspirations.