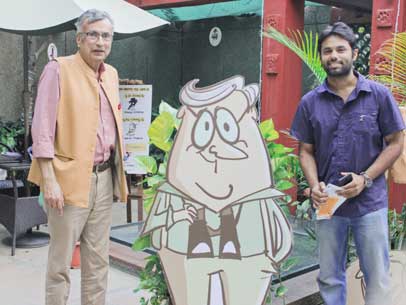 New Delhi: WWF-India today launched – The Toony Tails Exhibition by Rohan Chakravarty hosted by WWF-India. At a time when environmental awareness is the need of the hour, the comics use a humorous approach towards raising knowledge and awareness for wildlife protection and conservation

The Toony Tails Exhibition is a unique event that aims to create awareness about the wonders of nature, environment conservation and sustainable living. As the name suggests, these serious subjects are put across via cartoons and humor. The Cartoons are by Rohan Chakravarty and the exhibition is hosted and curated by WWF-India.

Rohan Chakravarty, a renowned cartoonist and illustrator won the WWF International President’s Award in 2017. Speaking about his passion and the exhibition, Rohan said, “I thank WWF India for choosing my work to occupy their grand office. I look forward to having people of all ages get introduced to wildlife with a twist, quite literally, because one of my comics needs you to dance like a drunk bear”

The Comic Exhibition will run for the next few months and targets a wide audience including school and college groups and corporates. It is expected that the fun learning activities would inspire, enthuse and educate visitors so that they are motivated to adopt the cause of conservation as their own. Children and adults alike will chuckle, smile and guffaw with Rohan Chakravarty’s ‘Green Humour” cartoons, while learning more fascinating facts about the wild, as well as the threats and solutions.

The Exhibition includes information about different species of animals mainly from India, WWF-India’s wildlife comic book “The Great Indian Nature Trail with Uncle Bikky, Bird sculptures by Niharika Rajput and fun learning activities like a Giant Board Game, a Photo Booth, a Doodle panel, a Show-and-Smell Corner, Animal Quizzes, Workshops and Talks by experts. All of these will impart invaluable learning about the steps we can take to save the environment.

Speaking at the launch, Ms. Radhika Suri, Director Environment Education, WWF-India, said “It is essential today that we involve children in the process that allows them to explore environmental issues and engage in problem solving. WWF-India looks forward to engaging with younger generations and citizens through this exhibition. We are honored to host this unique exhibition with a brilliant young mind like Rohan.