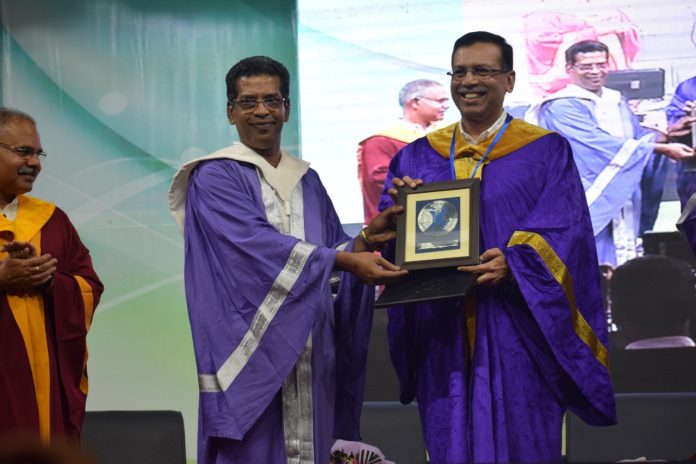 Bhubaneswar: Xavier Institute of Management (XIMB) which was established in October 1987 celebrated its annual “Foundation Day” this year on 30th of October. Shri Sanjiv Goenka, Chairman, RP Group was the Chief Guest and delivered the Foundation Day lecture. The RP Group is an Indian industrial conglomerate headquartered in Mumbai. The group has interests across diverse business sectors such as Power & Natural Resources, Carbon Black, IT & Education, Infrastructure, Retail, Media, Entertainment & Sports.
Shri. Sanjiv Goenka is a former President of All India Management Association (AIMA). Shri. Goenka is a recipient of several awards and recognitions, including the Global Leader for Tomorrow, World Economic Forum, Davos in 1993, the Outstanding Achievers Award from Indian Chamber of Commerce Young Leaders Forum 2005, the Indian Business Leader of the Year at Belfast Global India Business in 2013, the Banga Bibhushan Award for his contribution to the state of West Bengal in 2015, the Distinguished Fellowship Award of Institute of Directors, India at their 16th London Global Convention, 2016 and the Asian Leadership Award 2019 from Asian Association of Management Organization. Shri. Sanjiv Goenka is ranked No.18 in India Today’s list of 50 most powerful people in India in 2019.

XIMB was extremely privileged to have Shri. Sanjiv Goenka, Chairman of RP Group to grace the occasion. Xavier University Bhubaneswar was pleased to confer Honorary Doctorate in Business Management on Shri. Sanjiv Goenka. This is the third honorary degree conferred by the University since its inception in 2013. Fr. George Fernandes, Chairman, Board of Governors, XIMB and XUB presided over the function. Shri. Rajive Kaul, Chairman Emeritus introduced the Chief Guest for the evening to the audience. The new Vice Chancellor of the University Dr. Fr. Antony R. Uvari in the citation shed light on Shri. Sanjiv Goenka’s achievements as an industry stalwart.
The occasion provided good opportunity to the budding managers of XIMB to interact with the distinguished industry stalwart. On the occasion, 28 faculty and staff were felicitated for their long and meritorious service to the institute. The gleaming celebration concluded with the vote of thanks by Prof. Shridhar Kumar Dash, Dean, XIMB gratefully acknowledging the contribution of one and all in making the ceremony a grand success.

EXCERPTS FROM THE SPEECH

The foundation day lecture was inaugurated by Shri Rajive Kaul, Chairman, Nicco Engineering Services Limited, Kolkata, by conferring a shawl on Shri Sanjiv Goenka. In his opening speech he described Shri Goenka as, “a leader who inspires and builds confidence; with the highest integrity and as a person full of humility”. The Vice Chancellor, Dr. Fr. Antony R. Uvari, S.J., described Shri Goenka as a visionary and fiery leader. In his speech, Mr. Goenka, shared his experience of managing the power utility business in CESC. He emphasized the essential role motivation plays in any team, how the sense of pride in one’s organization can propel any employee to achieve success. He mentioned how focused he has been on building customer services and customer relations which has led the business to become the most acknowledged customer-friendly utility. He inspired the students of XIMB by giving them a success mantra to live by, saying, “Speak from the heart. Speak the truth. And you will be able to win the hearts of your customers.”