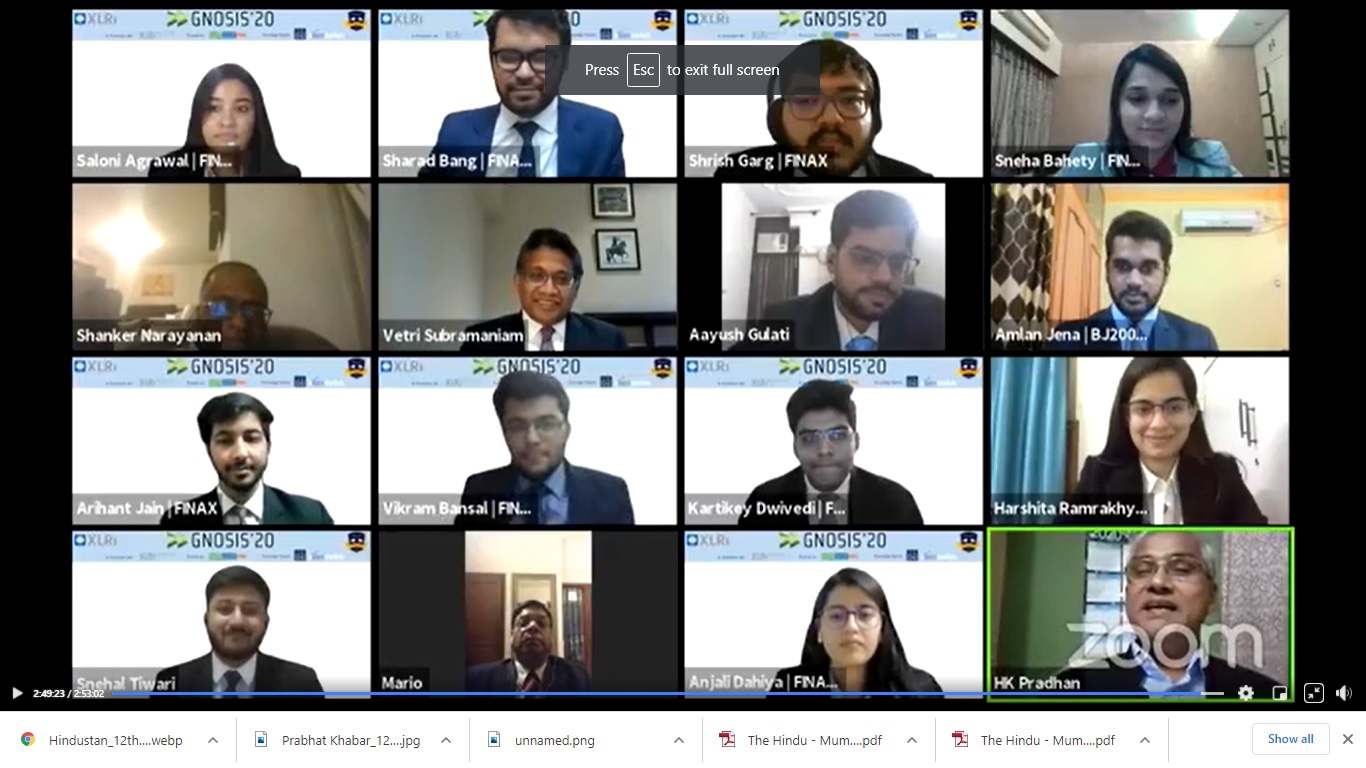 New Delhi: The Finance Association of XLRI (FINAX) recently hosted ‘GNOSIS 20’ – the 11th Edition of XLRI’s Annual Finance Symposium, a confluence of industry stalwarts and students to discuss the most pertinent issues & reforms in the finance sector. The theme of GNOSIS 2020 was “Ripples of COVID in the Financial Services Industry.” GNOSIS has traditionally been hosted in the country’s financial capital, Mumbai. For the first time, the event was conducted virtually owing to the pandemic.

The conclave focused on various issues that have come to the forefront during the pandemic and would influence the future of the Financial Services industry. There was a series of discussions on the economic scenario of India against the new normal, evolution of investment decision-making strategies in a post COVID world, changes in lending practices of banks and government bodies.

The conference started with a Special Guest session with Dr. Aruna Sharma, Former Secretary of Government of India. She emphasized increasing the pace of digitization in the Indian Financial sector, focusing on the transformation of the postal banking system, adoption of digital payments, and increasing financial literacy and cybersecurity among consumers and envisioning partnerships between MFIs, NBFCs, and Postal Banking system to reach the remotest audience.

T R Ramachandran (Country Head – VISA) said “Demonetisation – First big catalyst to promote digital payment, visa had a product earlier by the name of m-visa, which was a QR based service. The intersection of mobile tech and payments has never been more. PCE represents 60 percent of India’s GDP, the USA has 40 percent PCE, which is digitized in India that number is quite low. But that has been the reason for the massive increase in venture capital and start-ups in India. Coronavirus has increased the growth of digital. Tap to pay has become the thing where NFC tech will now help. 50 countries have more than 50 percent contactless payment. E-commerce has been a decadal shift representing 14 percent of global retail sales, and the number continues to rise. Payments are becoming heterogeneous than ever. Payment experiences are becoming more and more diversified and shifting to an open loop.

Praveena Rai, Chief Operating Officer, National Payments Corporation of India (NPCI) said, “The pandemic has increased digitization momentum n the country. Digitization has revolutionized every single aspect of life, and onboarding has risen substantially. There has been gradual migration from cash to digital payments, both offline and online. Now, people, consumers, and merchants prefer to go digital, adding that there has also been a big growth in UPI driven by QR’s acceptance. digitization is also driving savings habit among the customers, which is also leading to financial inclusion in the country

Manoj Kohli, SoftBank India Country Head said,” The investment climate in India is improving, and the economy will bounce back faster in the next financial year from the impact of the pandemic. From April 2021 will grow faster than the previous year and soon recover the lost ground. The Indian economy has clawed back faster than expected in the second quarter of 2020-21, with the contraction at 7.5 percent. Becoming a $5 trillion economy by 2025 is a fundamental goal and the next five years are tough. It’s not going to be easy, but we have to make it happen. Today we are nearly $2.7 trillion. Of course, COVID-19 has dropped it further, but it was like that before the pandemic, and to reach $5 trillion will be very intense. To achieve this target, the country needs massive investments, and since the Indian banking and financial services market is small, global investments are required, he opined. The key sectors that will drive growth and help India become a $5 trillion economy are infrastructure, manufacturing, healthcare, education, and insurance.

Fr. P. Christie S.J., Director, XLRI – Xavier School of Management said, “With India looking to lurch forward into the growth path to revive the economy; the emergence of technology and digitalization in the BFSI sector has become inevitable. The Covid-19 pandemic has acted as an accelerant to digital lending. Adopting technological innovations opened up the market for FinTechs and pushed further scope for innovation in the financial services industry. Banking innovation and the development of new technologies are a strategic priority. Artificial Intelligence is considered a differentiator to beat down the emerging competition in the financial services sector.”

“Over the years, GNOSIS has served as a platform to connect stalwarts of the industry, academics in the field of finance, and young professionals through engaging discussions on various trends emerging in the financial sector” he further said.