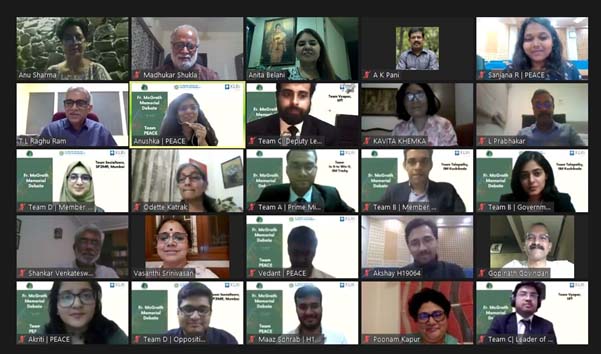 New Delhi: XLRI- Xavier School of Management in association with Fr Arrupe Centre for Ecology and Sustainability (FACES) and PEACE, a student group responsible for promoting sustainable and environmental conservation practices in XLRI recently conducted the first sustainability and ethics themed debate Father McGrath Memorial Debate virtually. It was an initiative by XLRI”s batch of 1985-87. The theme for the debate competition was ‘Be a responsible leader for the greater good.

In the light of short-term orientation and intense competition, ethics, and sustainability often take a backseat. For responsible businesses, it is imperative to look after the triple bottom line. To expose young leaders and youth to these aspects of the business, XLRI conducted the debating competition. The debate presented future leaders’ opportunity to showcase their awareness and leadership prowess to the masters-of-business across industries. It also provided a platform to learn from industry-leading CXOs and imbibe the greatness of sustainable leadership.

With the best talent picked from across 40 colleges and more than 180 participants, the top 16 teams were seen competing in the semi-finals round. From this pool, four winning teams emerged to compete in a debate in the finals adjudicated by industry stalwarts and previous debaters from the XLRI batch of 1985-87 and professors in the field of business ethics and sustainability.

The duo of Vignesh Kamath and Sukriti Jhingta from the Indian Institute of Management (IIM) Kozhikode has won the Father McGrath Memorial Debate in the closely contested finale with Mohammad Salman Hossain and Syeda Farheen Fatima from SP Jain Institute of Management and Research (SPJIMR), Mumbai taking the runners up spot. Ms. Maya Nagasunder from XLRI, Jamshedpur, was declared as the best individual performer.

iednewsdesk Jun 21, 2021
On June 16, the Federal Reserve announced it may raise interest rates twice in 2023 in response to…